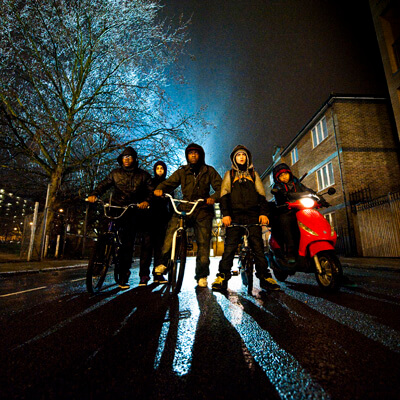 A sliver of the population, those weened on quirky, genre-bending flicks from the 80s and 90s, has been in withdrawal for decades. Stale remakes and overt nostalgia-grabs be damned! When will we again see horror, sci-fi, comedy and rebellious youth scrambled together in non-sanitized and exuberant fashion? Where is this generation’s Gremlins? Who is this decade’s John Carpenter? The answers are “right now,” Attack the Block and writer/director Joe Cornish, respectively.

Attack the Block is a fiercely rowdy and remarkably flexible film more concerned with entertainment than definitions. It tells its story on the run, minimizing boring explication in favor of forward momentum. It’s ballsy enough to initially introduce its eventual heroes as masked muggers threatening a defenseless woman with a knife and smartly written enough to seamlessly redeem them.  And then there are the ingeniously designed, British ghetto-terrorizing aliens.

But let’s not get ahead of ourselves. The aforementioned mugging crew is run by Moses, played by John Boyega, a teenager blessed with presence and gravitas decades beyond his years. He and his gang of feisty British malcontents mug Sam (Jodie Whittaker), a kind but foul-mouthed nurse whose night will only get worse. As the crime goes down, something arrives from outer space, flattens a car and scrapes Moses on the face. So, of course, he and his boys kill it with firecrackers and bats.

Turns out this intergalactic “something” has friends … a lot of friends. Within a few hours, these Brit brats find themselves hunted by furry, bear-sized creatures with no eyes and multiple rows of glowing teeth, and also accidentally find themselves targets of a dim-witted drug lord named Hi-Hatz (Jumayn Hunter). And somehow Cornish still found a way to wedge in a fairly nuanced sense of morality that manages to deftly comment on oppressive social hierarchy and taking responsibility for one’s actions. Not bad for a movie in which people’s faces get eaten routinely.

Between great smaller beats, like Nick Frost’s bloated and leather-clad weed dealer, and startlingly well-shot action sequences, Attack the Block gets so many things so very right it’s easy to forgive its hokey climax and ham-fisted, slow-clap ending.

Given how quotable the film is, it’s hilarious that the studio considered subtitling it due to the non-stop stream of British slang. A fear of the foreign is about the only impediment imaginable to those who have for years been looking for precisely this manner of genre mash-up tomfoolery.

What a relentlessly entertaining gem this one is. If life is fair, and it rarely is, Boyega will become a massive star, Cornish will embark on a long career packed with even more wickedly imaginative treats and Attack the Block will become a true cult classic, not the prepackaged kind that is often sold as such these days. It won’t thrill everyone, but if you’re in that aforementioned sliver of the populace who has been craving a genre-bending fix, you just scored big time.