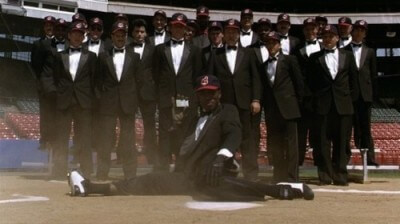 Hollywood still stubbornly refuses to make a blockbuster flick about the College World Series, despite my repeated emails proposing When Metal Bats Go Ding. They have, however, repeatedly drank from the well of America’s pastime, with scores of movies about baseball (92% of which feature Kevin Costner). Here is the definitive top 5 baseball movies ever made. And you can trust me on that because I’m a Cubs fan and thus have excellent decision making when it comes to baseball.

5.) The Natural – Featuring Robert Redford as God’s favorite baseball player, Roy Hobbs, The Natural features a breathtaking score and a bat named “Wonder Boy.” Wonder Boy was made from a tree that was struck by lightning, so basically Roy Hobbs is Thor with worse hair and less muscles. This one makes the list because, at its best, baseball is a sport that makes you feel like you’re a part of something bigger.

4.) A League of Their Own – Not only does this movie feature the only known pairing of the acting powerhouse duo that is Madonna and Rosie O’Donnell, it also features the single most repeated line in the history of sports movies. “There’s no crying in baseball” is still said daily. Again, I know that because I’m a Chicago Cubs fan. With a dollop of feminism, a great deal of comedy and a heck of a true story fueling it, A League of Their Own still holds up.

3.) Field of Dreams – One of the few films dude-bros are allowed to admit they cry about, this is easily the best movie to ever feature ghosts playing baseball. “If you build it, they will come” always sounded like a threat to me, but Kevin Costner built it and got to have a catch with his dead dad. The best thing to ever happen to Iowa tourism this side of The Bridges of Madison County, this movie hits you right in the feels. There’s no MLB stat line for that.

2.) Major League – You know a movie has to be good if I like it despite the presence of Charlie Sheen. From its quotable lines (“Just a bit outside”) to its copious use of the song “Wild Thing,” Major League is darn near a perfect sports comedy. I do worry that Wesley Snipes’ role as Willy Mays Hayes, who prided himself on stealing bases, is where Snipes got the idea to steal from the IRS. That said, there has literally never been a better use of Bob Uecker, so it was all worth it.

1.) Bull Durham – There are two kinds of lists about baseball movies: Ones where Bull Durham is ranked first and irrelevant ones. Everything that is good about baseball is in this film, which overcomes the presence of human Ambien pill Kevin Costner. With Tim Robbins stealing scenes, Susan Sarandon sultrying up the screen and Costner also present, Bull Durham reminds us that baseball is, at its best, a sport that moves our hearts.