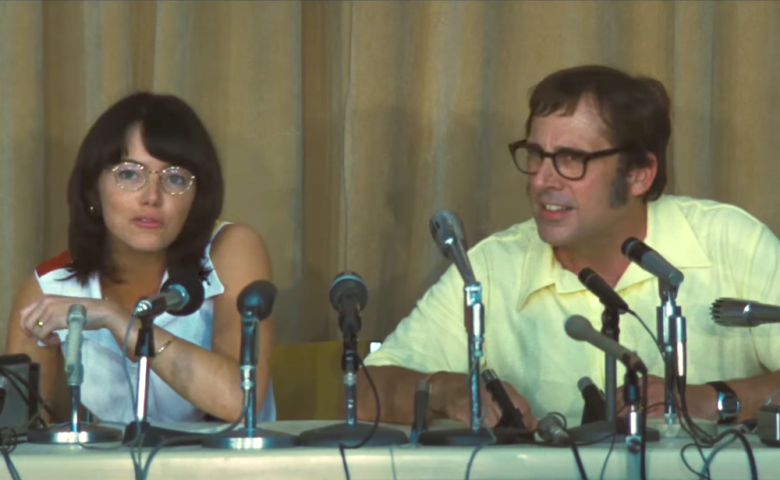 As the Supreme Poohbah of Pastry, Mary Berry, would far more eloquently and pleasantly explain from beneath the tent during The Great British Bake Off: You can have all the right ingredients and still make a gross-tasting cake of shame and disappointment. Battle of the Sexes has every element necessary to deliver a soaring triumph but winds up splatting and splooshing, like a tennis ball backhanded in the rain. From the cringy use of the “Magical Queer” trope to at least a dozen wink-and-nod uses of “getting a trim” in the context of lesbian sex involving a hair stylist, writer Simon Beaufoy serves this real-life collision of the quest for gender equality and sportsing directly into the net.

Feel the worst for Emma Stone, whose turn here as Billie Jean King is as nuanced and tender as possible for a role that includes a “you’re so pretty without your glasses” moment. The lead-up to the actual 1973 tennis match that pit an aged former champion men’s tennis player, Bobby Riggs (Steve Carell), against King is spastic at best. Instead of choosing a few key themes or pivotal aspects of the main players, Battle of the Sexes yanks hard on every dangling thread possible until the whole sweater unravels. Dammit, Weezer done warned y’all…

It’s impossible to out-and-out hate a movie that recounts a legitimately captivating and important moment in history. That said, it is entirely possible for something like what directors Jonathan Dayton and Valerie Faris have done here to make you long to watch a documentary on the same subject instead. Great “based on a true story” films use an elusive sleight of hand to Jedi-mind-trick audiences into forgetting that they already know how things play out. Sub-par ones, like Battle of the Sexes, remind you of the inevitable conclusion with the percussive grace of a drunken below-average bucket drummer.

The best part of the film involves the “Virginia Slims Tour,” started by King and her agent, Gladys Heldman (Sarah Silverman), when douchebro tennis executive, Jack Kramer (Bill Pullman), kicked King out of pro-tennis for daring to ask for more pay. Not unlike Netflix’s GLOW, a whole movie about that group may have been wildly endearing and given far greater insight into patriarchal problems and authentic concerns about equality. Instead, we get Battle of the Sexes, which dramatizes a complex social struggle mostly though male characters acting like supervillains who far-too-frequently explicitly proclaim how much they “sure do think women are dumb and bad!” There was a good movie to be made of this material. Sadly, this was not it.