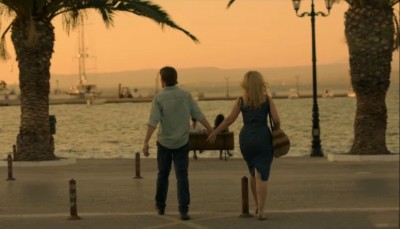 You know the moment. It’s that split second when your mouth sprints right when your brain comes up lame. Suddenly, an average argument about one thing one time is now an argument about everything every time. You’ve gone from questioning that evening’s plans to forcibly rewriting the geography of your heart, cartography only possible after a solitary trip across a great expanse known as “the future.” You know the thought: “How the hell did we get here?”

We know how Jesse (Ethan Hawke) and Celine (Julie Delpy) got here. We’ve watched them work their way to this point for nearly two decades. We stared slack-jawed at their indie earnestness in Before Sunrise (1995); we marveled at their raw romanticism in Before Sunset (2004). So here we stand, watching them Before Midnight, and it’s terrifying.

It’s terrifying because director/writer Richard Linkletter, who shared script credit with his stars, is so good at plundering reality. They are a trio of thieves who steal the authentic from our lives, flaunting fiction that invokes our own intimate truths. And sometimes it is hilarious, as when Celine and Jesse banter towards the end of their Greek holiday about the crimes age and gravity play on human anatomy. Sometimes it is touching, as when the couple fall into flirtation almost by accident after all these years. And often it is sad, as when the infinite potential of true love butts up against the tight confines of responsibility.

Evenly matched to a fault, Celine can’t fully empathize with Jesse’s imitation of Atlas; his back bulges beneath the burden of having abandoned his son from another marriage, having left her with his alcoholic ex-wife to follow Celine to Paris. And Celine struggles against Jesse’s ignorant dismissal of the doctrine that has guided her life, as he commits the popular new sin where well-intentioned men dismiss feminist concerns because they are not sexist themselves. Ignorance of the need for feminism is the new sexism, and Celine knows it, punctuating it hilariously with a pitch perfect, inoffensive rape joke.

For a movie that is little more than four scenes of walking and talking (or sitting and standing and talking), there’s so much at risk. While Iron Man and Star Trek ante up by putting the world and universe at stake, the peril of watching this love story potentially end on the wrong note is so much more concerning. Jesse and Celine aren’t Romeo and Juliet, a point they make by lightly taunting the bard during dinner. They aren’t beholden to stereotype or trope. They are just so damn real and so damn perfect for one another that if they can’t make it, how can any of us sleep next to a partner believing we can?

Before Midnight is quiet, shrewd and sparse. It is unassuming and unafraid to poke fun at its own sporadic pretentiousness. It is funny. It is heartwarming. It is heartbreaking. It is inspired. And above all else, it is so very real. So good luck with that…