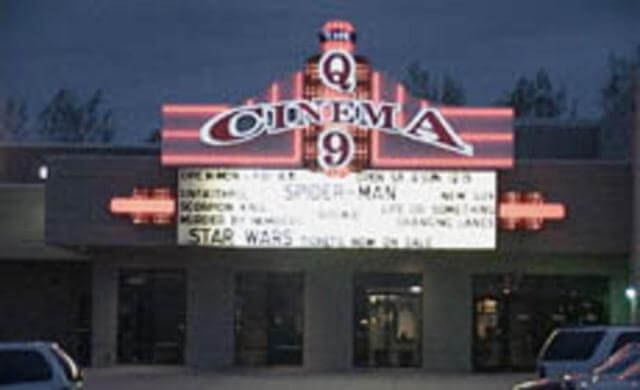 Like a morbidly obese bear lamenting the decline of bees, theater owners and studios grousing about the explosion of home cinema is almost exclusively about dwindling honey production and not genuine compassion for worker drones. For millions, the ability to consume film at a lower cost and within the comfort of spaces they know are friendly to their physical needs means unprecedented accessibility. Thus, this trend is—to stick with the metaphor—the bee’s knees.

I mention all this because I’m about to rave about the best experiences I’ve ever had in Omaha theaters and wanted to make sure nobody confuses my personal theatrical exuberance with a failure to understand the privilege in not having to think about the costs of attending movies outside my own home. More than anything, I’d love for the memories and stories below to be met with your own. If you don’t feel like dropping me a line at twitter.com/thereaderfilm or film@thereader.com, at least share the best moments you’ve had inside our city’s megaplexes and art houses with your friends and family.

As much as I believe movies can and should be enjoyed in whatever form is most comfortable for you, I also think going to the theater is an unparalleled communal exercise. Here are the brightest gems mined from my memories.

Every summer throughout my youth, my best friend from Illinois would come and visit. We’d use Leonard Maltin’s Movie Guide as our treasure map to plunder Blockbuster videos and Roger Ebert’s weekly reviews as our theatrical mandate, which is a sentence that reads like “We used a stick to find water” these days. At the dearly departed Q Cinema 9, he and I attended a midnight showing of the beloved classic Batman Forever.

As was wont to happen in the halcyon days before every major release opened on Thursday at 7 pm, a very drunk man attended the premiere dressed as Batman. Was this a young Ben Affleck in training? Who is to say? But yes. As the lights dimmed, the Bat-thusiast jumped on his seat, loudly proclaiming without any of the following censorship: “Batman Forever, motherpluckers!” Sadly, he had forgotten that trailers precede all films. So his introduction actually preceded a preview for the sequel to a movie about a boy and his orca. No worries, my friend loudly corrected him as the preview concluded: “Free Willy, motherduckers!” May you never again hear “Free Willy” without adding the last expletive.

It can’t rinse the taste of an awful film out of your mouth, but the right audience can make the flavor of a good film taste like heavenly manna. I wish I could eat Creed again with the group I watched it with at Aksarben Cinema that opening night. Long before Black Panther purred, Ryan Coogler and Michael B. Jordan’s seemingly unnecessary extension of the Rocky franchise was met by the single best crowd I’ve had the privilege to overreact with.

Gasping and cheering as though the boxing matches were not carefully choreographed and eloquently photographed but a live sporting event, that Creed crowd straight-up lost their shit during every match. Reactions of black audiences to film have been dumbed down and shamed to stereotype punchlines when in reality immersive consumption can be something spectacular, special and, frankly, brave. That final bout drained me like no other scene has before or since. I would live in that feeling if I could.

In reality, film going in Omaha can be divided into PFS (pre-Film Streams) and PFS (post-Film Streams). Wait… Look, the point is that Rachel Jacobson and (literal) company changed everything by allowing Omaha a conduit to cinema we had never had before. Sitting in the theater for that screening of La Vie en Rose, I couldn’t stop grinning like an idiot. And if you haven’t seen it, grinning like an idiot is not the standard reaction one should have to Marion Cotillard recreating the anguished life of Edith Piaf.

In many ways, it felt like the precise moment Omaha became the cultural city it had been pretending to be for a while. We suddenly had a cinema with a repertory theater! I had to learn what the word repertory meant! Sitting in seats with plaques of names from the donors who helped turn an artistically ambitious dream into reality made me feel like I was where I belonged, a confirmation that I was surrounded by people who saw in film and art the salvation I had long seen. It was like being hugged by Omaha, y’all. Best hug ever.

Before assigned seating was but a glint in the eye of someone who loves showing up for movies after the previews start, you had to wait in line not only for tickets but for seating. My aforementioned Illinois buddy and I waited in the line at the former-theater-turned-current-parking-lot Indian Hills for The Phantom Menace for about 24 hours. This was a more innocent time, shortly before being Jar-Jarred and ages before large swaths of Star Wars would publicly surrender to the dark side of open toxic masculinity and racism brought about by The Last Jedi.

My first association when someone says The Phantom Menace isn’t a twitchy expletive about George Lucas but a memory of that day spent in line. Kids had lightsaber fights all around us while strangers played chess with one another. Immediately behind us was a rotating group of fellow employees who each tagged in for an hour or so in order to hold the spot. In a time just prior to massive internet consumption, the spot behind us was a reminder how wide and varied Star Wars fandom had become. Long after I came to terms with the film as a muddled disappointment, my time among nerdy Omaha strangers remains dear to me.

Confine them to whatever category you’d like, but for all that’s good and holy, think about and share your best Omaha movie moments with me or anyone else. We are nothing if not the sum of our memories, and you’d be surprised how many of yours likely involve trips to the movies.