Home » Film » Don’t Love Thy Neighbor Too Much 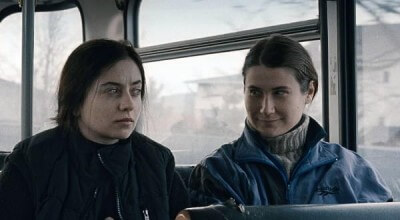 There was a shot so slow and quiet in Beyond the Hills (or Dupa Dealuri if you’ve got Romanian skills) that it appeared to be accidentally freeze framed. Nope. Writer/director Cristian Mungiu did that on purpose. Ostensibly, the unfathomably slow pace is to heighten reality; practically, it reduces themes that are complicated but totally obvious to a snail’s pace…and the snail isn’t a fast snail. Like, if there was a snail race, Mungiu’s pace would be that of the last place snail.

Like all thrill-a-minute cinema, Beyond the Hills is set in a Romanian monestary. Young Alina (Cristina Flutur) has reunited with her former orphanage mate, Voichita (Cosmina Stratan). Although she’s not necessarily the world’s most passionate convert, Voichita has found a place at a convent, which does not work for Alina. This is understandable, because deeply religious folks tend to look down upon the type of relationship that has developed between the girls, a relationship made obvious in the space of one oiled rubdown.

The crux of the film is Alina’s desperation to pry Voichita away from the grips of religion so they can flee to Germany. It says something about a film when the “utopia of desire” pined over is Germany. When she realizes she can’t get her lover to leave, Alina tries to stay. That doesn’t go so well, as she begins cussing and kicking and screaming and basically doing the sorts of things they give exorcisms for. So guess what happens?

Beyond the Hills isn’t a complete indictment of religion, a fact that some have praised. It also isn’t a condemnation of, well, anything. Themes of sexuality in the church, religion’s troubled relationship tending to troubled teens and the need for orphans to find a home have been grappled with by more skilled films, ones that didn’t linger over every habit (clothing or otherwise). Mungiu based his film on nonfiction works, and there can be no doubt that his determination was to present a reenactment in line with reality. And as much as he succeeded, it may not have been the wisest course of action.

Flutur isn’t particularly captivating as the teenager-in-meltdown, resorting too often to shrieks and never conveying in a believable way the depth of her love for Voichita. Stratan went the other way, choosing to over-weep and over-mute. The script seems to suggest a mutual love, but neither seem particularly convincing; it’s less “star-crossed lovers” and more “acquaintances with massage benefits.”

To give Beyond the Hills some credit, it’s honest. At no point does Mungiu’s film feel preachy, a challenge with the religious setting. And there is something to the “treating mental illness as demonic possession” angle that is intriguing, even if it was held back too far here. Those who embrace this work do so more out of what they have chosen to write in that what the film actually puts out, which is fine. If the worst thing a work of art does is make the audience do most of the art’s work, it can’t be too terrible.