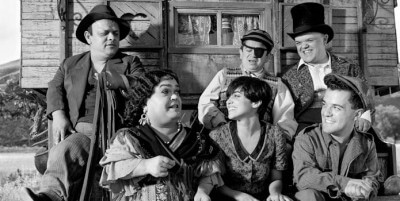 A silent film reimagining Snow White shot in black and white and set in Spain, in which the heroine is a bullfighter, is not an easy sell. Who knows what lengths writer/director Pablo Berger had to go through to secure financing for this gothic reworking of a famous fairy tale, set in 1920s Seville. But whatever he did was worth it. Blancanieves is what The Artist wants to be when The Artist grows up. It’s proof that a powerful score, expressive physical acting and imaginative directing can still deliver a silent film as resonant today as it would have been all those decades ago.

Renowned matador, Antonio Villalta (Daniel Giménez Cacho) is gored thanks to an ill-timed camera flash just as his wife dies in childbirth. The evil Encarna (Maribel Verdú) hatches a plan; she makes the now crippled Antonio dependent upon her and, once married, treats his daughter as a slave. Unbeknownst to Encarna, Antonio teaches his daughter to bullfight. And by the time Carmen (Macarena García) is full-grown, she is quite skilled.

Of course she gets run off and winds up with amnesia in the care of a troupe of traveling, bullfighting dwarves. And one day, as luck would have it, she is forced to jump in the ring, where her dazzling display of beauty and grace combines with her deceased mother’s dancing and her father’s matador skill. She becomes a phenomenon known as Blancanieves and, thus, a threat to Encarna’s self-aggrandizing attempts at dominating the public view. Enter poisoned fruit and kissing.

To take nothing away from Berger’s script or direction, there is no more important component in a silent film than the score. Alfonso de Vilallonga’s work here is absolutely transcendent; it is a lethal combination of flamenco, dark fantasy and passionate rhythm. What need is there for dialogue when music like this can express the emotion so delicately? Add to this the exceptional work of Verdú, whose villainous performance is better than Jean Dujardin’s as a tragic hero in The Artist. She even gets a chance to engage in some decidedly non-period-appropriate S&M behavior, which simultaneously frightens and lightens the mood.

If there’s a flaw here, it is in the pacing. Berger frontloads too much time with Antonio. As a rule, more time spent with matador dwarves (matadwarves?) and less time spent with wheelchair-bound papas is always best. Still, the film manages to take a particularly dark but insightful turn in the final act. It calls into question the complacency with which modern audiences accept Snow White’s rebirth as a byproduct of male physical affection. Basically, it makes kissing a corpse as necrophilia-creepy as it should be. So prepare to leave unsettled.

But you’ll also leave quite pleased. The Artist was overpraised because it used its silent approach as a sellable gimmick. Blancanieves is like the anti-Artist, concerned less about making a point about form and more about using form to make a point.