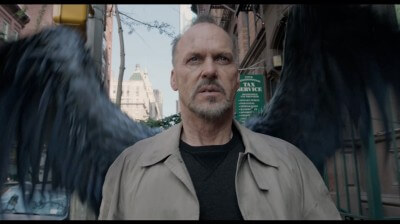 I know two things for sure: (1) Birdman aims to relentlessly drive home one singular point, one thoroughly expressed thesis about life and art. (2) It does not succeed. You would think that would make the work of writers Nicolás Giacobone, Alexander Dinelaris, Armando Bo and writer/director Alejandro González Iñárritu a total misfire. Not so fast, my fine-feathered friends. Despite its lack of clarity, conflicting thematic messages and indecipherable tone, the film is the rarest of oddities: accidental genius.

Michael Keaton plays Riggan Thomson, the washed-up former star of “Birdman,” a blatant Batman analog. After years spent squandering his celebrity, Riggan is a fame junkie trying to get his fix of public adoration and respect. So he sets out to write, direct and star in a Broadway version of “What We Talk About When We Talk About Love,” a classic Raymond Carver tale that should never find its way into a theatrical adaptation. In search of another actor to anchor the production, Riggan is forced to turn to Mike (Ed Norton), an acclaimed thespian and lover of the female lead in the play, Lesley (Naomi Watts). As Riggan’s rehabbed daughter, Sam (Emma Stone), looks on and his lawyer/best friend, Jake (Zach Galifianakis), gets progressively worked up, the show spins from chaos to promising to disaster and then to something uniquely bizarre.

Iñárritu’s film grafts Emmanuel Lubezki’s cinematography to look like one continuous shot. Some have derided the choice as too “showy” and unnecessary, but the smoothness and fluidity of the strategy gives a consistency that stands delightfully in opposition to the herky-jerky performances. Keaton is brilliant, flitting between Willy Lowman-like self-loathing and kinetic comedic beats. Norton steals the show, riffing on his real-life reputation for being “difficult” in service of his craft. Both Watts and Stone don’t get enough to do, but each lands a nice moment: Watts when she’s emotionally naked in Riggan’s dressing room, and Stone when she mentally pantses Norton.

But about that “accidental genius” stuff… It’s clear that Iñárritu and company set out to do something brilliant. They did. It’s just not the brilliance they intended. They clearly wanted to make a statement about the blurred line between “actor as celebrity” and “actor as artist,” along with jabs about cultural critics and modern definitions of fame. None of that stuff lands. Instead, Birdman works as an unintentional satiric condemnation of artistic pretension.

From Keaton’s meta-performance to Iñárritu’s use of surreal content, such as Riggan’s potential actual superpowers, art-based pseudointellectualism is hilariously impeached. Consider that Norton delivers monologue after monologue about the need for “honesty” in performances in a movie that features no honest performances, while Keaton indicts and spits on the audience he asks for love. Even the choice to use Carver, English undergraduate students’ go-to for intellectual posturing, is revealing. Maybe I’m wrong. Maybe Iñárritu and pals intentionally mocked themselves and other pretentious “artists,” “critics” and consumers. I can’t be sure. What I am sure of is that Birdman is one hell of a riot.