Home » Film » Birth of a Nuisance 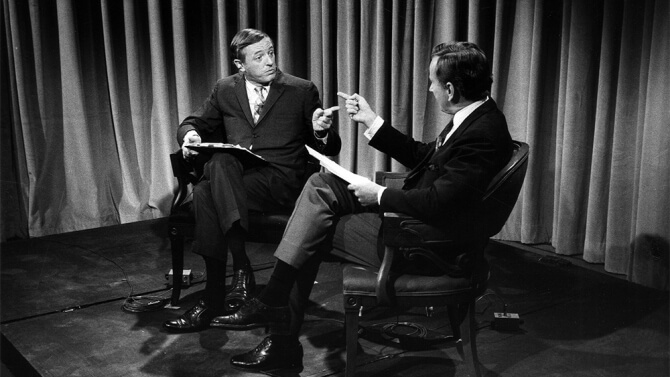 A long time ago, in an America far, far away…television news was the most trusted source of information for the public. Weird, right? In the late-60s, the country was embroiled in a heated debate over the conflict in Vietnam and the Civil Rights movement. Television news remained as centered as possible to avoid offending anybody on either side of the political spectrum. After years of floundering in the ratings at third place, ABC evening news decided to invent a Frankenstein’s monster that would attract viewers to its coverage of the 1968 Republic and Democratic national conventions: pundit politics.

Directed by Robert Gordon and Morgan Neville, Best of Enemies follows the epic series of debates between William Buckley Jr. and Gore Vidal during the ’68 conventions. Sparring over solutions to the greatest issues of the time, conservative Buckley spent most of the debate denying that racial discrimination existed and progressive Vidal argued for LGBT rights and fighting income inequality. Okay, so maybe not an America too far, far away… Anyway, ABC knew what it was doing when it put two prominent intellectuals with opposing ideologies next to each other and told them to talk politics. “Argument is sugar, and the rest of us are flies,” says one observer.

Best of Enemies works well enough when it lingers in archive footage of Buckley and Vidal during their pompous, comically eloquent arguments, but stumbles when it cuts back to interviews with modern political analysts discussing the ’68 debates. The comments from analysts on both sides are a well-intentioned move by Gordon and Neville to make Best of Enemies feel “balanced,” but they are usually nothing more than redundant observations or weak sound bites. For a documentary that never misses an opportunity to remind you how awful pundit politics has made television news, such heavy use of sound bites from so many television news pundits does raise an eye brow.

In the penultimate debate, Vidal referred to Buckley as a “pro-crypto-Nazi,” and Buckley infamously responded, “Now listen, you queer, stop calling me a crypto-Nazi or I’ll sock you in your goddamn face and you’ll stay plastered.” In that moment, Vidal won the entire series of debates and a feud was ignited that Best of Enemies decides to rush through. It’s unfortunate that the documentary doesn’t seem too interested in the lifelong fallout of the debates, which Vidal smugly relished in and Buckley never lived down. There is some mention of their lawsuits against each other. We’re told that they were, at the time, the longest and loudest lawsuits ever between two public figures. So why not explore them more?

For whatever reason, the thesis of Best of Enemies is plainly spelled out but slapped over the end credits. That’s certainly an odd move, but it doesn’t mean it’s any less resonant. Television news has become a polarized mess that sells two different versions of this country and allows Americans to buy the one that agrees with them. A lot of that has to do with the ’68 debates between Buckley and Vidal. Although the media should never be too biased toward fairness, maybe the people delivering critical information to the public shouldn’t be the best of enemies.