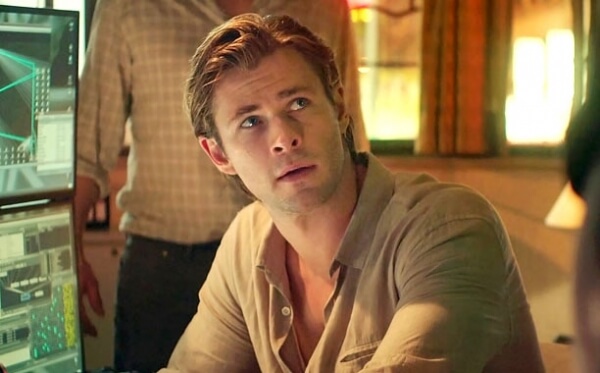 Opening with a hypnotic computer sequence that feels like an episode of “How It’s Made” that’s tripping balls, Blackhat works very, very hard to make cybercrime look sexy. Hence the casting of Chris Hemsworth as Nick Hathaway, a former MIT student serving a lengthy prison sentence for hacking into banks. A bad guy hacks in and causes a nuclear reactor in China to go boom because explosions are sexy. The government agent they dispatch to investigate, Chen Dawai (Leehom Wang), just so happens to be Hathaway’s former MIT roommate.

A similar attack on an American nuclear plant failed, so Chen high tails it to America with his sister, Lien (Wei Tang), to liaise with them because liaising is sexy. Chen convinces FBI agent Carol Barrett (Viola Davis) to spring Hathaway from the clink to help them locate the nasty cyber baddie. Hathaway and Lien rather quickly begin “plugging into each other’s networks” because that’s literally sexy. The gang chases leads from Chicago to China to Jakarta sexily traveling and sexily gunfighting along the sexy way. Me thinks he doth protest too much…

The “he” being director Michael Mann in this case. With his signature close-ups filmed by a camerman with a hand tremor, Blackhat is immediately identifiable as a Mann film. Sometimes that’s a good thing, as the shootouts are super thrilling and the climactic encounter is so brilliantly staged it deserves to be the climax to a much better movie. How Blackhat manages to feel simultaneously laboriously long and completely spastic is impossible to explain.

Much of the problem comes down to Morgan Davis Foehl’s script. For MIT attendees and cybercrime specialists, everyone in the movie is impossibly stupid. For example, Hathaway is a convicted criminal with much needed skills in computer hacking. So why is he brought along when a SWAT team tries to physically capture a bad guy? Literally everyone else in the scene has a gun but him. What is he doing there? Is he going to yell binary code at the mercenaries? Hemsworth should be thankful the script is as clunky as it is because it distracts from his truly brave decision to give his character the voice of Sylvester Stallone doing elocution drills.

When Blackhat is good, it is very very good—seriously, that climax tho. But when Blackhat is bad, it is as bad as “what if Jason Bourne was a computer programmer” sounds. Too overlong to be a pleasant diversion, too badass in parts to completely dismiss, this is a movie that tapdances on the precise equator between good and bad.