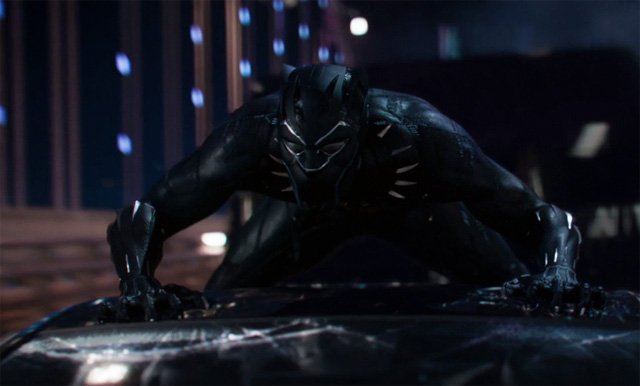 On one side: Mongoloid white douchebros screaming “Wakanda isn’t real!” into the social media void. On the other side: The expectations of a community told “wait your turn” for generations, finally having their pop-culture number called. Squeezed betwixt that thankless vice, if Black Panther were somehow just “okay,” it’d be impressive. But it simply isn’t.

Already sporting a filmography with a valedictorian Rotten Tomatoes percentage, writer/director Ryan Coogler delivers a rousing action spectacle that challenges colonial constructs and reshapes mainstream conceits about black identity. Also, two grown-ass men in cat suits fight on electromagnetic train tracks before pontificating on the trauma of slavery while Bilbo from The Hobbit holographically flies a drone over a sea of warrior women brawling with an African army that has armored battle rhinos. This is shit nobody has ever seen on a scale that everybody should revere. It is majestic, lyrical and just so goddamned cool.

The first third of Black Panther feels a bit unsure of its footing, with a series of scenes that don’t sequentially blend so much as awkwardly run in parallel. T’Challa (Chadwick Boseman) is struggling with his sudden ascent to Wakanda’s throne, a role that comes with the burdens of a nation and a sweet superpowered costume. Elsewhere and meanwhile, CIA Agent Everett K. Ross (Martin Freeman) aims to make a deal with the villainous Ulysses Klaue (Andy Serkis) for a stolen load of vibranium, a magical metal found only in a Wakandan mountain. Klaue’s associate, codenamed Killmonger (Michael B. Jordan) has his own agenda that involves seizing the Black Panther mantle and using the advanced technology of the secret African nation to violently free oppressed black people around the globe. Which, you know, seems fair.

Let’s start there: Killmonger is the best Marvel villain by such a wide margin, Taylor Swift is now responsible for only the second biggest downgrade involving Tom Hiddleston. If Jordan doesn’t get the kind of buzz heretofore reserved only for white dudes who portray the remarkably-easy-to-play Joker, let that bullshit be called out. Boseman is softly incredible in a less flashy but more challenging role, while Danai Gurira and Lupita Nyong’o relentlessly kick ass and Letitia Wright steals absolutely every scene she’s in. The cast is so stacked and flawless, Angela Bassett just got mentioned sixth in this paragraph.

Black Panther is such a loaded feast that digestion is done Sarlacc Pit-style. Here’s a quick, bullet-pointed list of what the film tackles:

Other Marvel movies have been rightfully dinged for weak villains, generic scores, visual sameness and superficial themes. The first megabudgeted superhero movie written by, directed by and almost exclusively starring black people may have just pointed to what was missing. Black Panther is next level.