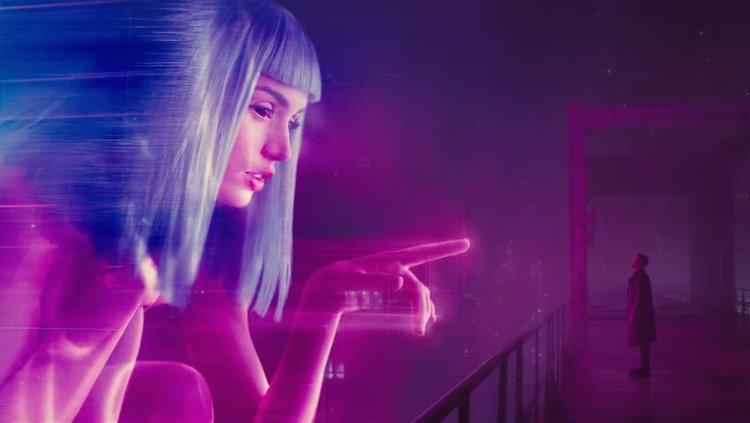 It is profoundly insightful and upsetting that both Blade Runners explicitly tackle the sins of civilizations built on slavery and sexual subjugation without including a single woman of color in a prominent speaking role. Beyond this revealing repeated slight, which should have been harder to miss than a skyscraper-sized Atari ad, Blade Runner 2049 plays footsie with perfection. Endowed with a visual precision on par with its predecessor and a story that stays grounded and intimate while suggestive of vastly larger issues, this nearly three-hour-long broodfest could have doubled its runtime and still been all kinds of wowza.

As in the original, the context of 2049 is actually only faux-dense, imitating complexity more than truly engaging in it. Production of rebellious robo-slaves known as Replicants was prohibited some point after the 2019 events of the first film, due to those ‘bots getting a wee-bit stabby. Cue Niander Wallace, a blind inventor who barfs quasi-biblical nonsense so pretentiously it’s easy to believe Jared Leto has been method-acting this part his entire adult life. Wallace creates a new, more obedient breed of electric sheep counters, like K (Ryan Gosling).

K is a Blade Runner, which means his job is “retiring” (killing) his now-illegal older “brothers and sisters.” He commits these robot-on-robot hate crimes with the utmost diligence, until his boss (Robin Wright) assigns him a task that results in him meeting Harrison Ford, which always derails life plans—right Shia and Calista? With only his completely digital, Siri-with-a-sex-drive girlfriend (Ana de Armas) to confide in, K begins a muted, somber quest that ever-so-wisely chooses to eschew epic scale in favor of woeful personal realizations.

Someone somewhere will probably write a review of 2049 that doesn’t do somersaults praising the lavish look crafted by cinematographer Roger Deakins and director Denis Villeneuve. Not this time though! Often openly, kindly mocking the darkness of Ridley Scott’s original, 2049 is awash in color and light, disproving the 35-year-old theory that dystopia would fall apart if the sun ever touched it. Given the different cinematic landscape, it’s not likely Villeneuve’s work will flex its dominance over the next generation of filmmakers like Scott’s did. But it conceivably could, and that alone is a gobstopping accomplishment for a movie built in the shadow of a sci-fi colossus.

Although “older-is-better” nostalgics loathe giving a sequel/remake/reboot credit, 2049 is also far better acted and sounds better, save for the score. Composer Hans Zimmer gleefully infuses his sturm-und-drang “bwaa-bwaa” noises over riffs on the original Vangelis material, which results in a hard-fought draw. Even the cringe-worthy, rape-culture elements that mirror the problems of the first installment play a bit more like critiques of gross men this time out, save for a really bad one involving the ass-kicking villain, Luv (Sylvia Hoeks), near the end.

All told, this feels like the best-case scenario for a sequel three-plus decades in the making: it is a glorious visual evolution of its predecessor that retains only the tones and themes it needs. We may never know if androids count electric sheep, but Blade Runner 2049 is one hell of a glorious, neo-noir, recurring dream.