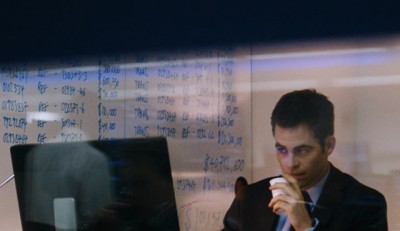 A good movie leaves you questioning previous notions. A series of cliches vaguely edited in the shape of a movie like Jack Ryan: Shadow Recruit makes you question your previous decisions. If at first, second or third something doesn’t succeed, Paramount will put Chris Pine in it. Pine is the fourth Jack Ryan, a character so devoid of personality literally any white male can play him. Ryan’s schtick is that he’s more brains than brawn, which probably works great in Tom Clancy’s novels, but watching a character think on screen isn’t very exciting. This alleged thriller has all your favorite action beats, including bomb with a countdown clock and file that’s almost done downloading.

The economically minded Ryan is recruited into the CIA by Thomas Harper (Kevin Costner), a man seemingly always on the verge of yawning. Ryan is then placed on Wall Street where he monitors banks, a job that the government apparently doesn’t actually have in real life. He notices some Russian accounts that look fishy, so Harper sends him to Moscow. Ryan’s fiancee, Cathy (Keira Knightley), follows along and goes from having no idea her partner is a spy to joining him in full espionage in about five minutes. Realizing bad bank assets aren’t exhilarating, there’s a bomb thrown in there too.

Pine was seemingly carved by God to be an action star. He has all of Tom Cruise’s charisma with significantly less alien-based religious beliefs. Yet he can’t quite find the right roles. Jack Ryan is so boring. If he had asked any of the three previous very famous people who abandoned the role to describe this non-character, perhaps Pine would have passed. Knightley’s American accent is wound so tight you can almost see her face pucker. Branagh, who also directed, gave his borscht-filled baddie such a stiff upper lip his mouth barely moves. Meanwhile, Costner thought the food provided on set was delicious.

Even the title of the film show the vacant, hollow nature of this lethargic paint-by-numbers, punctuated by a scene where Pine stands among a bank of computers and busts a plan decades in the making using the hottest social media sites. It would be silly if everyone wasn’t so stone-faced serious. A good spy movie requires taking the film one of two directions: action-heavy and fun (like 007 films) or methodical and thoughtful (like Tinker, Tailor, Soldier, Spy). Jack Ryan: Shadow Recruit wants to be both and manages to be neither. It falls in the cracks between the two, into the void of competent and nearly mediocre diversionary fare. Dear Paramount: Don’t give Mr. Ryan a fifth do-over please.