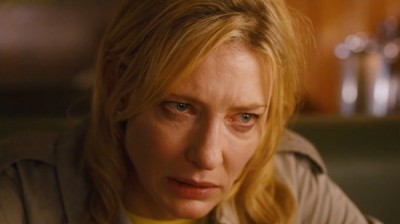 Any review of Blue Jasmine that doesn’t start with a linguistic supplication of the otherworldly-talented actress doesn’t understand the magnitude of her performance. Shazam! Finding a drama centered around a woman who isn’t a stripper, hooker, murderer or murder victim is like stepping out back for a cuppa and seeing a prancing unicorn. It pole vaults the Bechtel Test hurdle in the first 15 minutes! Hell, if you didn’t know any better, you’d swear that a woman is as capable of helming a masterful character study as a man…

Blanchett’s walking acting clinic is the titular Jasmine. Her hubbie, Hal (Alec Baldwin), Bernie-Madoff-ed his way to prison, stealing from Jasmine’s friends and family and banging everything in sight along the way. The complicated question is embedded inside Jasmine’s victimhood. Was she the dotingly naïve wife who “got the vapors” around her husband’s financial schemes? Or was she so blinded by the bling she didn’t care where it came from? And what of Hal’s philandering?. Her genuinely heartbroken reaction when he confirms his extramarital mambos seems to indicate an honest lack of knowledge. But how to reconcile that with the fact that her friend declares literally everybody else knew…

Jasmine’s past unfolds alongside her present, living with her sister, Ginger (Sally Hawkins), in a place that’s geographically in San Francisco but spiritually located in Tennessee…Tennessee Williams to be specific. Ginger’s ex-husband, Augie (Andrew Dice Clay), was a Joey Sixpack who lost a lottery fortune investing with Hal, likely hastening his divorce from Ginger. Now, Ginger is with Chili (Bobby Cannavale), who is basically Augie 2.0. As Jasmine flails and flounders, fully separating from reality in a psychotic fit, the movie gamely tackles issues of conspicuous consumption, classism, love, marriage and Blanchett’s perfect teeth.

The complexity of Jasmine is her entire beauty. Nothing about her is easy. Her name isn’t even Jasmine! And Ginger, isn’t even her sister, as they were both adopted. In a sense, every relationship that Jasmine has had with anything other than money and status is totally devoid of reality. Blanchett’s bravery is in letting audiences hate her at times, which she had to know they would. Her dismissive elitism is so potent, if you bottled it you could tear gas Occupy Wall Streeters with it. What’s remarkable is that Blanchett is so good, there almost isn’t enough time to say how insanely nuanced Hawkins and (gulp) Andrew Dice Clay are. The Diceman done bringeth it!

Now for the downer: it is narratively uneven, falls prey to omni-present Allen observations about relationship minutia and doesn’t budge much in terms of plot or character from start to finish. Jasmine’s mental state and physical state are almost exactly the same when all is said and done, a no-no for character studies. But y’all: You cannot miss these performances, especially Blanchett’s, which would be career-defining for anyone else but is simply another feather in the cap of one of the all-time greats.