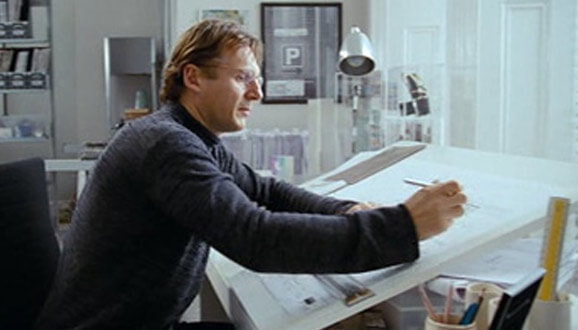 In The Pursuit of Happyness, a harmless movie everyone has dutifully and properly gone on to forget ever happened, Will Smith’s character quickly solves a Rubik’s Cube. The scene is a perfect example of visual shorthand, a way to show you how intelligent he is without having someone simply tell you. This way, you don’t spend valuable screen time with some laborious detailed demonstration of genius, like remembering all of the characters from HBO’s “Game of Thrones” without notes.

Whereas 99% of Americans must work to survive, movie characters don’t have that same need, being that they don’t actually exist. Thus, occupations become shortcut, a quick way to convey something meaningful about a character just by telling you what they do. I’m not talking about films in which the occupation and plot are intertwined, like say any movie about cops or the mafia. Hold on, is being in the mob an actual occupation? Do they have business cards? I know it’s not a box you check on an IRS form, but I’ve never considered whether “mobster” is a profession. I may be getting off track.

When thinking about movies and “work,” two occupations came into focus. Alone, each is interesting for what it suggests. Together, they tell an even more fascinating tell about the messages we send through fiction to men and women. So let’s talk about the charming male architect and the female sex worker (who “shockingly” turns out to be a human being).

“You know I always wanted to pretend I was an architect.” – George Costanza

You haven’t noticed. I almost guarantee you haven’t. A stunning number of male characters on screen, disproportionately those featured in romance-based movies, are architects. Want a few?

For an inappropriate number of seasons, the lead character on “How I Met Your Mother” was an architect. Now, here’s the kicker, how many architects do you know? How many have you ever met? Tons of people have worked a service job or in retail, so why does Hunky McSmoldering in that generic rom com wind up with a career that’s relatively small? The American Institute of Architects has less than 84,000 members. If they were real, movie architects would represent a significant voting block.

There are obvious reasons why architect stands out as an option. It pays well (which is appealing to audiences), it has prestige, its mysterious (I don’t know how to architect, do you?) and it doesn’t place logistical barriers to screenwriters in terms of place or time.

But that’s not the story here. The story here is the message it sends about who the character is. Few professions instantly exhibit both a creative and logical proclivity. You must be able to envision a beautiful building and understand the dimensions and steps necessary to build it. If you were workshopping the perfect man, you’d check both boxes, right? You’d want him to be imaginative and practical. Boom. Architect.

Reinforced in this decision is the loathsome and latent suggestion regarding the superiority of men. Think about it: Architects are, quite literally, builders of worlds. To expand the term to its furthest definition, God is the architect of humanity; thus, human architects in fiction are possessed of a fraction of godhead. It’s no wonder her pulse races when he’s around, right? This is the part where I remind you that a shortcut is cheating, and cheating is bad. You’ve watched decades of movies with male architects and never even noticed what it was saying.

The Tart with a Heart

The whore with a heart of gold is old. Very old. You can trace it back to biblical depictions of Mary Magdalene or ancient Sanskrit drama. In movies, it’s simply the role you take as a woman if you want to win an Oscar. 13 women have won Oscars playing prostitutes. Let that sink in. Unlike how architects stealthily crept by you, you know how often the lead female in a movie is a prostitute.

And so on. I mean, at this point, it may actually be easier to list actresses who haven’t played hookers (yet). And if you open it up to professions that operate the same way in film (strippers for example), it grows even bigger.

Now, I don’t have to tell you why having men play successful architects and women play sex workers sends a rather awful message. I just want to tell you it’s worse than you think. The premise of the “hooker with a heart of gold” is that it’s a rarity. The entire trope is based on the idea that this being is a unicorn of sorts. It can only work as a theme if the assumption is that the character wouldn’t or shouldn’t typically have a “heart of gold.” Oh, and “heart of gold” is an umbrella term used to describe actually being a decent human being.

So, on the one hand, you have the message that this device sends about actual, living sex workers. It’s a subtle reinforcement of the idea that most of them are inherently “bad” and “dirty.” How much easier it is to ignore disease in that community or human trafficking if the assumption is that most of them  don’t have “hearts.” On the other hand, you have what it says about the film characters themselves. They are universally in need of salvation. The ultimate damsel in distress, the heart of gold is payment for freedom. They trade that prized possession for rescue from a man who they want to love so much they’ll do him for free.

What’s more, the lazy use of prostitute as an occupation builds shallow characters. Not because actual sex workers aren’t dynamic, but because this profession is interesting enough to writers that they don’t feel the need to further consider these women as people. The men may be architects, but we don’t spend laborious scenes watching them as they use their calculator and protractor to draw a foundation for…okay I have no idea what architects actually do. But we do see the women having sex or looking for tricks. For the men, the architect use is mere window dressing. For women, being a prostitute is the sum total of their existence.

So there you have it, the work life of movie characters considered in context. Now, if you’ll excuse me, I’m about to write a script where a female architect falls for a male tart with a heart.