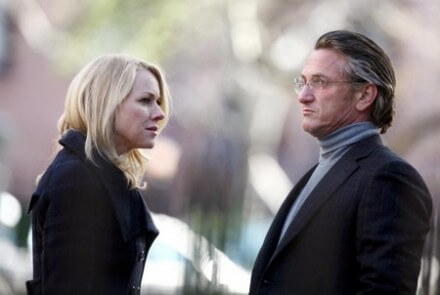 Forget Congressional censure and domestic or international courts of law, the Bush administration will apparently burn for their sins beneath the withering lights of largely ignored, star-driven movies. Score one for justice! If we can’t expect the guy who directed Swingers (Doug Liman) to preserve our democracy, who will stand as the last defender of this once great republic?

As Matt Damon’s Green Zone before it, Fair Game has a longer memory than the fickle American public more apt to grab pitchfork and torch over “Dancing with the Stars” results than over a false march to global war based on doctored information. With the former president on a book tour finally addressing tough issues like how it felt when Kanye hurt his feelings, it only feels right to consider the other side … and that means finding Sean Penn.

Penn plays Joe Wilson, a former ambassador appointed by the Clinton administration whose wife, Valerie Plame (Naomi Watts), was a covert C.I.A agent. In 2002, the C.I.A. asked Plame if her husband, who had spent ample time in the region, would be willing to travel to Niger to help assess a claim that Iraq had tried to purchase a mind-boggling, Dick Cheney-exciting amount of nuclear material. Wilson quickly and thoroughly determined these claims were as fictional as bipartisanship and submitted his findings.

Meanwhile, Plame was moved to the head of a unit investigating Iraq’s weapons programs. Despite her repeated findings that concluded there were no such programs, Chief-of-Staff and head douchebag Scooter Libby (David Andrews) refused to yield, only passing along intelligence that supported the administration’s predetermined conclusion. When Bush risked a pants fire by lying in the State of the Union about the Nigerian nuke purchase, Wilson went on the attack.

Pegged into a hole by “truth” and “facts,” Libby and Karl Rove (Adam Le Fevre) decided to change the story by leaking Plame’s covert status to the media, blowing her cover, likely killing dozens of people she had worked with and reducing her and Wilson’s life to a smoking crater. Shock and awe wasn’t just a foreign export, as Fair Game weaves its way through the smoldering ruins that used to be the life of a dedicated public servant.

Culled from books by both Plame and Wilson, the screenwriting team of Jez and John Butterworth can’t be considered non-partisan. But facts are facts, and when strung together with emotional torment as demonstrated by best-tear-producer Watts and best-owner-of-rage Penn, the result is righteous indignation brewing in all those willing to listen.

Liman manages to keep the film paced like an action film … without any action, complete with tightly shot and bleached footage. Even with Penn playing Wilson as kind of an ass and Watts gettin’ her grimace on for two hours, things feel modestly thrilling at times and rarely plainly didactic.

Although never outright fun and not full of the gnashing, thrashing performances that raise Oscar’s eye, Fair Game is another addition to the time capsule of increasingly forgotten Bush administration issues. Here’s hoping whoever digs it up one day knows what to do with it all.