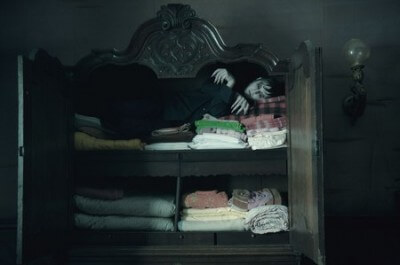 Seriously? This is what it’s come to? Johnny Depp, that delightfully oddball talent who once worked with John Waters and Jim Jarmusch, has reached the point in his career where he’s in movies that climax with a witch barfing on him. For real?

After Alice in Wonderland saw director and apparently terrible friend, Tim Burton, reanimate the corpse of Depp using CGI to puppeteer his body into the most humiliating shuck-and-jive, it looked like the worst was behind this increasingly dysfunctional couple. Nope.

Welcome to Dark Shadows, a remake of a late 1960s-era soap opera that put a vampire in the center of a troubled romance back when their kind weren’t depicted as homeless Abercrombie and Fitch models. The original series may have been quirky, campy fun, but this latest incarnation is belched from the depths of an uninspired Hell. Bad movies happen and can be forgiven. Wildly lazy, spectacularly stupid movies must be ridiculed to dissuade their kind from comin’ round these here parts again.

Stupid is having an opening voiceover narration that says exactly what’s happening on screen. As we watch Barnabas Collins (Depp), a wealthy heir to a fish fortune, spurn the advances of a hussy housekeeper turned sorceress (Eva Green), Depp’s voice tells us that he spurns her. Thanks! We see her murder his true love, turn him into a vampire and imprison him underground for two centuries, as Depp tells us that his true love was murdered while he was turned into a vampire and imprisoned underground for two centuries. Double thanks! There aren’t words to describe how obnoxious just the introduction is.

When ole Barny gets accidentally freed, he finds his family’s empire in ruins and a gang of weirdos in the estate. Elizabeth (Michelle Pfeiffer) and her daughter Carolyn (Chloë Grace Moretz) live with Elizabeth’s brother Roger (Jonny Lee Miller) and his son David (Gulliver McGrath). Oh, and there’s a psychiatrist played by Helena Bonham Carter—she legally must be in every Burton movie—who is there because David sees ghosts.

Barnabas insta-falls for the new nanny, Victoria Winters (Bella Heathcote), presumably because she’s almost as pale and oddly shaped as he is and is an absolute dead ringer for his one true love. That whole maybe-reincarnation thing is never explained, but given how boring everything else is made out to be, nobody minds. The family readily accepts the vampire, and the gang set about tackling the witch who has now dominated the fishing market. That’s right, prepare for an epic battle over canned fish.

There’s so much bad, a single review can’t contain it. Do you use your word count to describe how the vampire sometimes burns in sunlight and sometimes doesn’t? Do you describe horrible editing that has Barnabas call attention to his bloody clothes five seconds before they spontaneously disappear? Do you talk about how freaky it is that they made Moretz writhe and slink while dancing, make reference to her pleasuring herself and then hammer home over and over again that she’s 15? Do you bemoan the stillborn love story? Do you lament what’s become of Depp and Burton’s career?

Let’s just end there. While Burton’s repetitive semi-gothic schtick became dead to those with taste years ago, Depp curiously remains on everybody’s “I like him” list. No more. He hasn’t made an objectively good movie in almost a decade and is now trotting out parodies of himself, complete with goofy voices and wacky posture. Enough is enough. And Dark Shadows is so much more than enough.