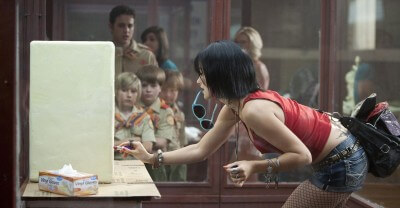 In the wake of a Presidential debate that was almost fact-free on one side and nearly lifeless on the other, smearing Butter on one’s eyes seemed like a good option for poll junkies. This allegedly politically charged ensemble comedy promised a send-up of campaign rhetoric, a no-holds-barred takedown of our no-holds-barred electoral system and a scantily-clad Olivia Wilde. One out of three ain’t bad, and if you had to pick just one…

Wilde’s near-nude character is as good a place as any to start with all that’s right and wrong with writer Jason A. Micallef and director Jim Field Smith’s marginally humorous supposed allegory. Wilde plays Brooke, a stripper willing to add hooker to her resume when rent is due. One night, after his savage, Sarah Palin-inspired wife, Laura (Jennifer Garner), loses her nut to a particularly unendurable degree, butter-sculpting champion Bob Pickler (Ty Burrell) gives in to the temptation of Brooke’s flesh. When Laura discovers this affair, she finishes her already half-completed job of going fully mental.

See, Laura’s whole identity is Bob’s butter sculpting contest. She’s the “first lady of butter” and can’t imagine a life outside the, albeit limited, local public eye. When Bob is asked to quit competing so someone else can win for a change, and in the wake of Bob’s playing “hide the single” with Brooke the stripper, Laura enters the butter contest on her own. And she might win too, if it wasn’t for adorable foster child, Destiny (Yara Shahidi). A savant with butter sculpting, Destiny’s kind and supportive new new foster parents (Rob Corddry and Alicia Silverstone) encourage her to express her artistic side. That is, provided an ugly, mean car dealer played by Hugh Jackman (yes, ugly) doesn’t ruin her chances.

If you saw a clear political message in there, congratulations! Other than Garner taking on Palin affectations and the presence of lots of flags, there’s no easy one-to-one message to follow. There are hints of such a thing, buried in Laura’s aspirations for the Governor’s mansion and the young, vibrant, gifted black public speaker who defeats her, but such things are pretty superficial. And that’s really where Butter went a bit wrong.

Because as a nebulous comedy and not a social satire, everything almost works. Garner’s power-hungry she-beast is surprisingly nuanced and sexy, Wilde’s hooker/stripper is hilariously manipulative and Destiny’s family problems are actually pretty moving. The need to try to shoehorn in more quasi-political observations eliminated Wilde’s best storyline, featuring Laura and Bob’s daughter’s lesbian awakening, and truncated the focus on Laura and Bob’s marriage and Destiny’s racial struggles. It feels like the first draft of this script may have been quite good, but subsequent rewriting and editing resulted in a rather mushy, shapeless slab of Butter.

Still, Corddry gives maybe his most approachable performance ever, maintaining his biting wit while not acting like a completely unlikable douchewaffle, and there are a few decent sized laughs, including Jackman’s willingness to play an awkward moron. Consider this review something less of a full endorsement for Butter and more of a reluctant vote.