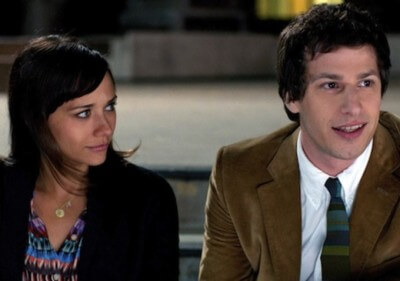 Jones, who co-wrote with Will McCormack, makes some classic first-time screenwriter blunders, including giving almost every character a stupid name (when was the last time you were in a room with both a Tucker and a Celeste?) and giving everyone fancy weird careers (have you ever met a “trend forecaster?”). Considering the strength of the movie is displaying the authentic, messy nature of real-life romance, these weird quirks (we haven’t even gotten to the tarty pop star yet) work in direct opposition to the film’s goal. What’s left is a breakout display of what Jones is capable of buried in a coat of hipster nonsense.

Celeste (Jones) and Jesse (Samberg) were high-school sweethearts who got married too young and divorced too fast. They remain best friends, despite the whole failed marriage thing. They see each other every day, still live together and still end conversations with “I love you.” This understandably freaks out their best friends Beth (Ari Graynor) and Tucker (Eric Christian Olsen), who feel like they are emotionally stunting themselves.

After a few months of separation, Jesse boffs Veronica (Rebecca Dayan); it’s not quite a rebound, as he really likes her, but their relationship gets off to a rocky start what with him being still legally married to and obviously still in love with Celeste. When she is told by Jesse that his thing with Veronica is like “for real” for real, Celeste launches on an introspective journey aided by her gay business partner (Elijah Wood) and a Britney Spears clone (Emma Roberts) who winds up a gay icon because of a logo that looks like anal sex. Oh, you wacky indie, you!

There are problems beyond the shoehorned quirk: Samberg is painfully uncomfortable being “real,” the relationship between Veronica and Jesse is woefully underexplored and director Lee Toland Kreiger seems to want his film to look like someone scrolling through Facebook photos of fake eyeglass-wearing, navel-gazing, trendy doucehbags. Then there’s the inherent problem with the “lesson” that Jones seems to come to, which is that she should have settled for the lazy, penniless, emotionally juvenile Jesse because she “loved him.” Why?

Jones almost pulls it all together with her performance, which vacillates between awkward comedy and beautiful introspection. She’s as comfortable climbing into a trash can as she is grappling with her inherent need to be right all the time. It’s a great performance in an average-at-best movie, which is sad, considering Jones deserves to be more beloved than she currently is.

Celeste and Jesse Forever wanted to be a dourer When Harry Met Sally but plays more like The Breakup re-enacted by customers at a Whole Foods. Still, it’s just barely worth seeing if you jones for Jones, which more people should do these days.