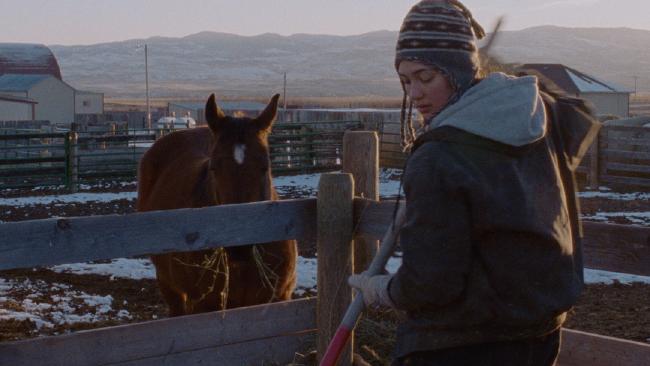 I giggle, snicker and titter anytime someone bursts open the thesaurus pinata to describe a film like Certain Women with synonyms like “quietly modest” or “methodically enthralling.”

But that’s not a bad thing. Just as hyperactive pacing can throttle a thrilling narrative, glacial movement can serve to underscore tone and theme in profound ways. And such is the case with Certain Women, my favorite of Reichardt’s films and one of the best I’ve seen this year.

Reichardt’s screenplay is adapted from the short stories of Maile Meloy, whose book Both Ways Is the Only Way I Want It both describes my nacho preference and got insta-purchased after watching the adaptation. Following three intersecting lives in Montana, none of which are overtly dramatic, the film opens with Laura (Laura Dern), a lawyer dealing with a client, Fuller (Jared Harris), whose workplace injury claim is not going so hot. Toxic masculinity being the cocktail that it is, Fuller finally believes it when a male attorney tells him what Laura has been telling him—that his case is borked—and promptly goes NRA-nutso. Of course, this leaves Laura to negotiate a hostage situation without bloodshed because a woman’s work is never done, even at gunpoint.

On the surface, the second story of Gina (Michelle Williams) and Ryan (James Le Gros) is far less significant. Unless you consider the purchasing of quality sandstone for a newly built home to be titillating. And yet, the way Gina uses Ryan to ply the desired stones from aged curmudgeon Albert (Rene Auberjonois) is a deft bit of feminism, especially given the context of Ryan’s infantilizing of his wife to their daughter. Finally, the best of the bunch is a tale of unspoken affection told in gestures, as Jamie (Lily Gladstone), a soft-spoken ranch hand, falls for Beth (Kristen Stewart), a lawyer teaching an education law class in a small town. Jamie could care less about the subject but is gravitationally drawn to Beth, making Beth’s decision to surrender her position just terribly, quietly heartbreaking.

No shocker: Reichardt gets the absolute best from the entirety of her cast. Dern is the divine epitome of exhausted competence, Williams cuts a beleaguered but brilliant wife, and Gladstone and Stewart share more emotional depth in silence and space than the dump truck of spilled words often given to listlessly loving, non-couple couples. What’s particularly great, besides the film’s uncanny ability to replicate the sensation of reading a heady, well-collected, complementary collection of short stories, is the tactful feminism deployed in casual asides and male absence.

I loved Certain Women. I loved it in a way that people have loved other works by Reichardt, which makes me happy. I always knew she was profoundly talented, but her work had never hit me so flush before, never piercing my target directly. Certain Women, to this specific man, is a goddamn bullseye slowly struck.