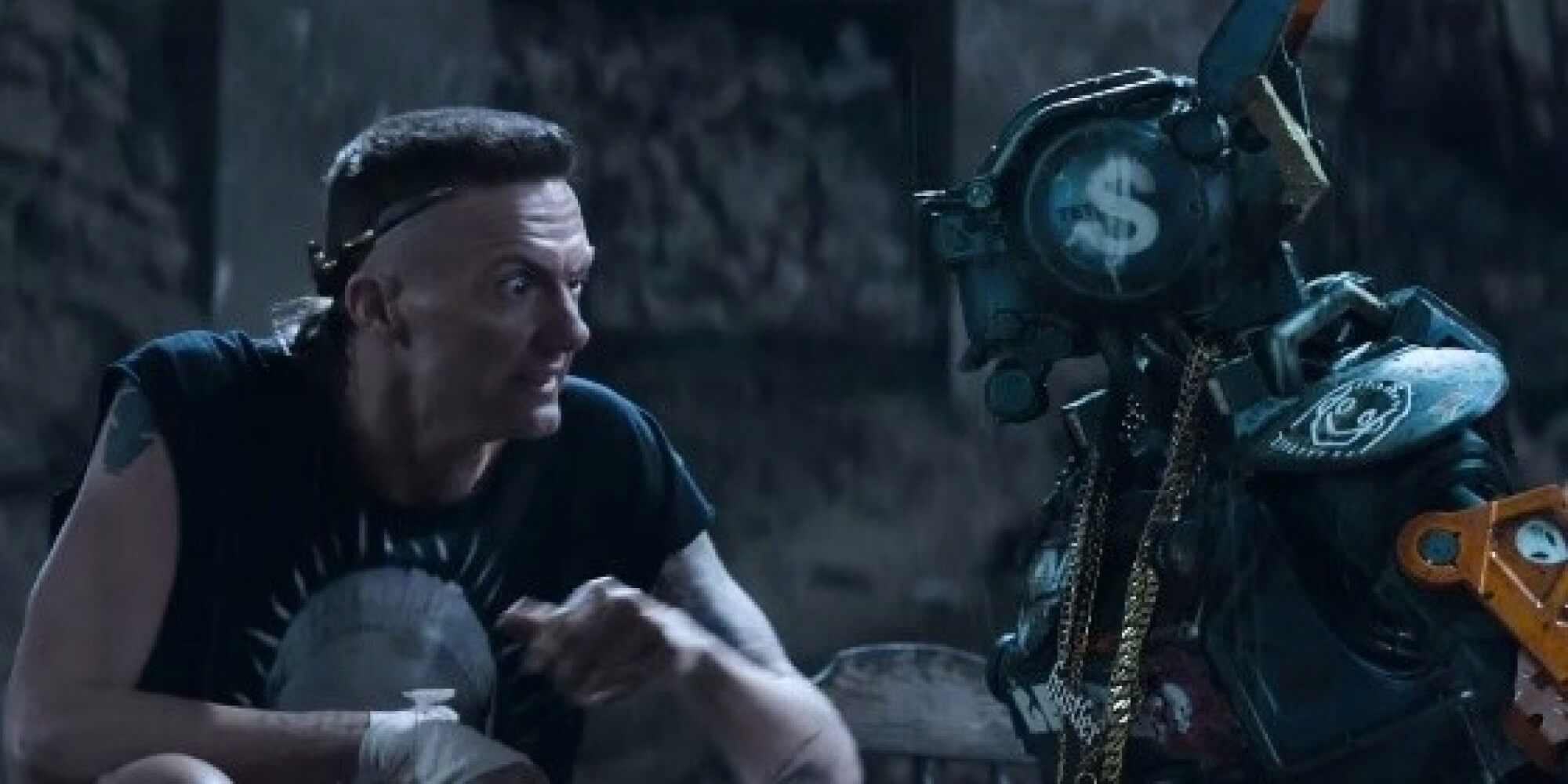 Die Antwoord, a South African rave-rap group composed of rappers Ninja and Yolandi Vi$$er, are what some would call an “acquired taste” and others would call “Oh God, no! What is that? Kill it with fire.” If you haven’t seen images of the band, please tell those of us who have seen them what sleeping without night terrors is like. Chappie doesn’t just star Ninja and Yolandi, it’s their movie. Their music is the soundtrack. Their insane personalized slang litters the dialogue. Their subplot eventually moves from “B” position to “A” position. What I’m saying is this: If you threw up in your mouth a little at the phrase “rave-rap” and giggled at a white South African rapper named Ninja, you won’t survive Chappie.

As someone who actually owns several of their albums (this is a no-judgment zone), the primary problem is that writer/director Neill Blomkamp (District 9) only half-commits to the creative insanity Die Antwoord oozes. While he puts them front and center in all possible ways, he dials their surroundings and the script down to basic, rote clichés. Die Antwoord traffics in the audaciously ridiculous, daring you to walk the razor’s edge of their comedic self-parody and straight-faced gangster badassery with them. Chappie never has the guts to commit to that.

Instead, the plot is nothing but a tired reworking of artificial intelligence clichés. Deon (Dev Patel) is a programmer who helped bring an automated robotic police force to Johannesburg. He wants to take the tech even further, much like the real-world scientists who are undoubtedly hastening our demise at the hands of our future robot overlords. Deon’s rival, Vincent (Hugh Jackman), is trying to pimp his police tech design, a huge hulking monstrosity that’s total overkill (with ground-to-air missiles) but controlled by a human.

Deon cracks the code for computer sentience by the power of Red Bull and uses a broken robot to test it. Unfortunately, Deon and his newly self-aware robot are kidnapped by low-life criminals Ninja (Ninja) and Yolandi (Yolandi Vi$$er)…yes, Die Antwoord even keep their stage names as characters in the movie. Ninja and Yolandi, or “daddy and mommy” as Chappie (Sharlto Copely) creepily calls them, try to trick the robot with a child’s intellect into becoming their secret weapon for a big heist.

I can’t imagine what seeing Ninja and Yolandi on the big screen for the first time would be like. I half wanted to watch people watching the movie more than watch the movie. No matter his shortcomings elsewhere, Blomkamp can straight-up visually crush even the most boring, muted sequences. From gorgeous environments, like the gang’s hideout, to frenzied robot-on-robot violence, Chappie is just so cool to look at. But Blomkamp botched the formula here. You can’t just drop batshit insane entertainers into a rote movie and think “my work here is done!” Had it been more unhinged and odd or had it been dramatically less Die Antwoord-ly focused, Chappie could have been more than the haphazard hot mess it is.