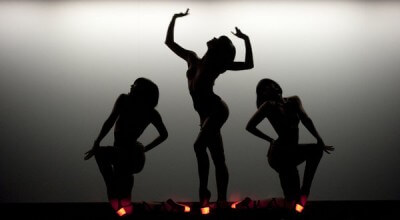 Dress it up with classy filmmaking terms all you want, but facts are facts: Crazy Horse is an idling, simplistic documentary peppered with lady butts. Acclaimed director Frederick Wiseman (Titicut Follies) unleashes his cinéma vérité prowess on a subject unbecoming, lazily meandering through what appears to be a low-rent, mildly titillating Cirque du Soliel club in France. The intersection of art and sexuality has notoriously provided some of the most evocative and challenging content imaginable. Presumably, none of those great works featured a warbling, off-tune and heavily accented rendition of Britney Spears’ “Toxic,” punctuated with pubic hair.

Wiseman’s hands-off approach has been a staple of his filmography and has served him quite well when the subject is engrossing. His immersive methodology, which sees him gather hundreds of hours of footage, can be revelatory and insightful. Sadly, in this case, all we glean insight into is precisely how far ladies should raise their supple buttocks to be considered a candidate for naked karaoke.

The film takes place at Le Crazy Horse de Paris, which bills itself as the premiere nude dancing show “in the world,” an unproven assertion filled with more hubris than fact. In what amounts to watching how the “sexy sausage” gets made, Wiseman takes us into backrooms where intricate choreography is dissected, with concerns such as just how close the ladies are capable of putting their faces near each other’s crotch. It’s not that the film is offensive or exploitative so much as it is sexually numbing to see so much joyless nudity.

Clocking in at nearly an hour too long, likely a symptom of the disease of overfilming, the dance sequences seem endless and repetitive. The tune may change, but it’s still more or less a glorified striptease set to a frequently goofy soundtrack. If Crazy Horse is accurate, a trait its style seemed chosen to guarantee, it’s unfathomable how such a location has gained such fame.

Part of the problem is that no narrative organically emerges. No named characters present themselves, no honest conflict develops and no natural drama or insight steps forward. It is every bit as revelatory as watching a well-shot dirty music video; so rejoice if you miss “The Thong Song” era.

It’s not as though there wasn’t interesting material that could have been pursued. Watching beautiful young women standing on the stage for auditions and being examined like so much livestock, udders and all, could be insightful. It isn’t, but it could have been. As could an examination of the clientele, as it’s unclear what kind of audience seeks out a “classy” dose of hoo-hoo exposure with mild acrobatics mixed in. But ultimately, it just feels like a huge waste of time.

As prolific as Wiseman has been, it’s reassuring to know he’ll likely work his way toward redemption swiftly. But until then, it’s safe to say that his most recent endeavor is proof that even a heaping helping of T&A can’t fix everything.