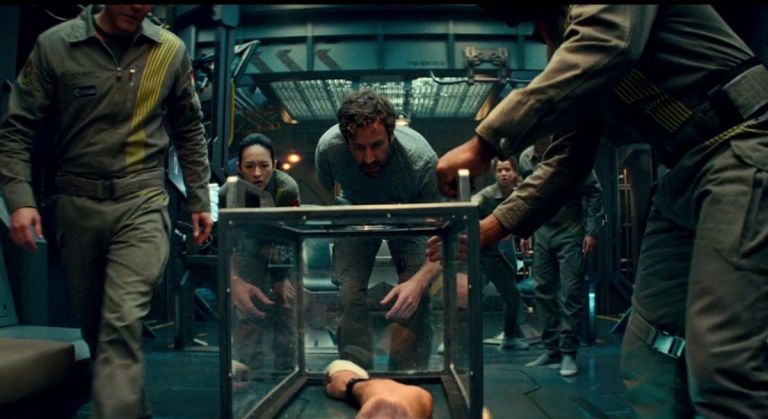 At this rate, the next installment in the Cloverfield pseudo-franchise is going to suddenly appear as just a memory of you having seen the film. Splooshed onto Netflix with far more fervor than The Ranch will be covertly sneaked off Netflix, The Cloverfield Paradox made headlines for a distribution model that didn’t let gatekeeping critics in major cities establish a consensus first. When rotting tomatoes were finally counted, the narrative began to warp from Netflix’s market disruption to how Paramount successfully dumped a sci-fi stinker. Except, deliciously paradoxically, the film is actually pretty damn good.

The bouncing baby byproduct of a menage a trois between Event Horizon, Sunshine and Spaceballs, The Cloverfield Paradox is surreal, gross and borderline hilarious in the best ways. Six crew members aboard a space station are trying to fire up a particle accelerator to alleviate the earth’s power crisis. They goof that plan right up and wind up terrorized by Russians barfing earthworms, Chris O’Dowd’s sentient severed arm and a murdery person from a parallel dimension who, honestly, is kinda morally justified for being so shooty.

In the same way that 10 Cloverfield Lane’s “woman gets kidnapped by a weirdo” plot didn’t exactly reinvent the molecules that hold scripts together, The Cloverfield Paradox’s narrative is willfully flimsy. It’s a simple “we have to undo the bad thing we did/trapped in space” movie. It’s like a trippy-weird Gravity or Interstellar, only this movie actually lets people who aren’t white be astronauts too. The cast is good enough to nearly pass up an “out of this world” pun, most notably Gugu Mbatha-Raw, who sells the shit out of dialogue bad enough to scour the credits for “Script Doctor: Tommy Wiseau.” David Oyelowo, Ziyi Zhang and John Ortiz give remarkably genuine, thankless performances while O’Dowd visibly embodies the gymnastic straddle between sincere terror and slapstick shenanigans.

The creativity and flexibility of the Cloverfield series is admirable, even if it is clunky and poorly incorporated here. Theoretically, this movie is the Rosetta stone by which the sci-fi of the previous films can be explained. In practice, there are just a few moments connected to the other movies attached with the precision of a toddler supergluing pottery back together and declaring “It fixed!” Who cares? The Fast and Furious franchise churns out scripts with only verbs and James Bond hasn’t defeated SPECTRE in 50+ years. The Cloverfield Paradox cuts right to the action and is deliriously hallucinatory and spooky without using jump scares as a crutch. It’s good-spirited, fun and, yeah, pretty stupid. That also describes dogs, people. Are you saying you don’t like dogs?

That said, Cloverfield needs to stop acting like Schrodinger’s franchise. Instead of welding a few weirdo connecting elements onto nearly finished films, it needs to either fully commit to an anthology format or incorporate the broader narrative more decisively into the planning. Thankfully, The Cloverfield Paradox leaves the door open to either dimension of imagination.