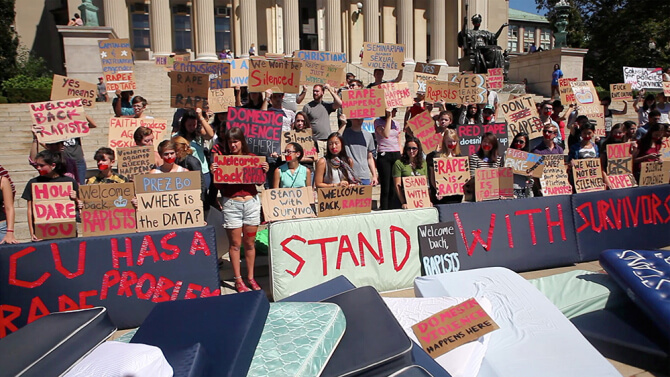 There is a moment in the documentary The Hunting Ground when a male college student is tailgating and looks into the camera to complain, in total disbelief, “So just because I have sex with a girl and she said ‘no,’ that makes me a rapist?” Dangerously ignorant mentalities like that are exactly why The Hunting Ground, directed by Kirby Dick (The Invisible War), should not only be required viewing for all incoming college students but probably for all incoming university administrators, too.

Dick’s new film opens on a montage of home videos observing young women celebrating after being accepted into their dream universities. It’s the most chilling sequence we’ve seen this year because, unfortunately, we know what the next scene is going to be. “Before classes even started, a friend and I were sexually assaulted,” are some of the first words spoken. That is followed by interviews with survivors from universities all over the country, discussing their attacks and the abhorrent responses they often received from administrators after reporting the crimes.

What’s truly, profoundly astonishing about The Hunting Ground is that it manages to capture the terrifying scope of the campus sexual assault epidemic. Although it runs at a sleek 90 minutes, this film is massive and you feel it. Reading statistics and news stories about this epidemic just doesn’t stand up to seeing it presented this way. For example, the first act mostly shifts between survivors recounting their assaults and infographics about campus assault statistics (reinforced by a distinctly and alarming high number of credible sources). It feels cluttered, but how can it not? Dick is a good enough filmmaker, though, to make sure that it feels cluttered without feeling clunky.

The benefit of this technique is that Dick is able present an incredibly well rounded look at the issue that even takes the time to explore the complex institutional pressures working against assault survivors when they report their attacks. From university administrators being worried about high crime rates causing low enrollment rates, to Greek life organizations protecting their accused members with cultish vitality, to college athletes being cash cows… Survivors don’t just face an uphill battle for justice, they face a seemingly impossible one.

One particularly damning revelation is made in the film’s segment about sexual assaults in fraternity houses, which recently became timelier than the filmmakers could have ever predicted. Sigma Aplha Episolon, one of the largest fraternities in the country that you probably remember from that video, is known on several campuses across America as, “SAE: Sexual Assault Expected.” Yeah. SAE needs to go. I’m sorry fellas, but putting a bunch of 18-to-22 privileged men in a mansion and locking the door is a terrible idea anyway, and The Hunting Ground showed that you’re exactly the reason why.

Before The Hunting Ground fades to credits, it reminds us that 100,000 college students will be sexually assaulted by the end of this year. That is horrifying. Even scarier is to realize that university administrators will dismiss most of those that even do report, just like they always have, while the protection of their attackers will be prioritized. The Hunting Ground is an important documentary. It’s a chilling reminder that a lot of people in the world agree with that tailgater I quoted at the beginning, and an insight into the incredible will of the survivors fighting to end the epidemic.