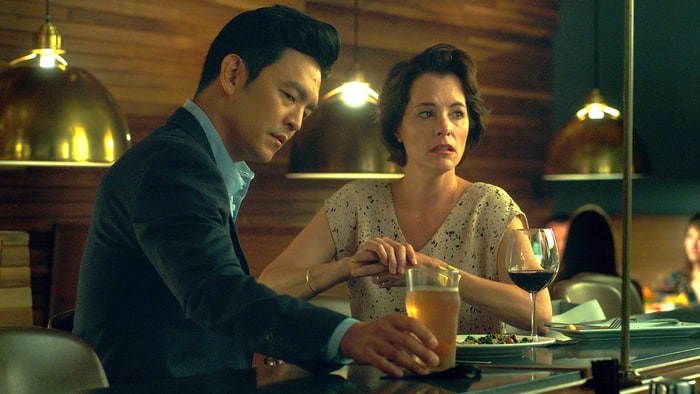 I love films where the setting itself feels like a major supporting character. Sadly, outside the realm of science fiction, we don’t get many of them. That’s why it’s so frustrating that Columbus is on the cusp of greatness but falls just short. For the first hour or so, Columbus is one of the best films of the year. I was already speculating where Columbus might end up on my top 10 list by the time it toppled down an entire letter grade. Columbus is a really good film, but it so easily could have been a really great one.

Set in Columbus, Indiana, an oasis for beautiful modernist architecture in America’s pragmatically built Rust Belt, the film follows Jin (John Cho), a Korean-American translator working in Seoul who reluctantly visits the city after his renowned architect father collapses on a speaking tour. Then there’s Casey (Haley Lu Richardson), the brilliant architecture nerd who rejected scholarships at major universities to stay home and care for a mother recovering from addiction. Refreshingly, Columbus spends a good bit of time developing these characters before they actually meet when Casey offers Jin a consoling cigarette.

From there, an intimate relationship develops, as Casey takes Jin on a tour of her favorite buildings in the city. Except, I never got the impression their intimate relationship was romantically intimate, which is why it’s such a disappointment when Columbus finally pairs them up. The relationship between Jin and Casey is so fascinating because it’s so difficult to define. We’re never quite sure why these people specifically gravitate toward each other, but somehow it makes perfect sense. Reducing the relationship to just two lost souls bumping uglies undermines a lot of the intrigue that made Columbus so intriguing in the first place.

That said, Cho’s and Richardson’s performances are their best ever. Cho’s been dismissed for being most famous as the Harold half of movie stoner duo “Harold and Kumar,” which makes it easy to forget how much he can do in a good role. I’ve only seen Richardson in two films, so far, but I can easily see myself going to films just for her in the future. These are quiet but truly great performances. Ultimately, the characters are better acted than written, making the film all the more frustrating. Of course, their performances couldn’t resonate so well without the help of the incredible looking city of Columbus.

Almost every image in the film is a frame-within-the-frame, a not-so-subtle but effective way of contrasting the characters’ messy lives with the methodically precise architecture constantly surrounding them. For the most part, it’s stunning to look at and creates a peculiar, stiff tone that’s actually hypnotic when it’s working best. Some scenes inevitably feel a bit stagey because it’s impossible to organically work the frame within a frame technique into every little moment. A shot here and there is even over-stylized to the point of silliness. I love films that treat their settings as characters, but the overcooked portrayal of Columbus in Columbus is another reason why the film falls just short of greatness.