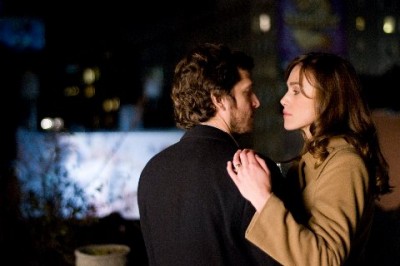 Last Night , the directorial debut from Massy Tadjedin, is a flawed but ambitious little drama focusing on a stylish, successful pair of New Yorkers. Joanna (Keira Knightley) and Michael (Sam Worthington) have been married for three years and have been together for longer. Despite separations due to Michael’s frequent business trips, they seem happy and healthy in their relationship and comfortable in their privileged Manhattan oasis.

A brief argument about an attractive co-worker of Michael’s (Eva Mendes as Laura) sets the stage for what happens the following night. Michael, away on business in Philadelphia, spends the evening drinking with Laura, while Joanna unexpectedly runs into an old flame named Alex (Guillaume Canet).

Her pull towards Alex is easily understandable, as they have a short but intense history together, whereas his attraction to Laura seems to be more of a base, uncontrollable urge. We follow Joanna and Michael through their separate successions of sleek, dimly lit hotel bars and hotel rooms as they wrestle, with varying degrees of determination, to quiet their impulses.

Although it can sometimes make it feel aloof, there’s something mesmerizing about Last Night ‘s cool simplicity and its cold, luxurious atmosphere. Tadjedin frames her actors in shots often shrouded in darkness, creating images that are sometimes as obscure as the moment-to-moment feelings of our protagonists.

It’s what goes unsaid that says the most, and the film’s most effective moments are where glances or gestures do the talking. These moments always come by way of Knightley and Canet (and Griffin Dunne, as Alex’s friend Truman), who have a magnetic energy together that’s exciting enough to carry the whole film. Worthington and Mendes unfortunately create something much duller. And Worthington, the vaguely familiar looking block of muscle some may remember from Avatar and Clash of the Titans , is distractingly out of his league in scenes with Knightley.

And that brings us to the movie’s main problem: Joanna and Alex’s story is so good that the rest of the film feels like dead weight. Michael and Laura come on screen and suddenly we’re trapped in that horrible realm: the precious problems of the rich and beautiful. Thankfully, there’s enough insight in the better half to make up for much of that and to prove that this film is smarter than its worst moments. Despite everything, it’s the good, haunting moments of Last Night that end up lasting.