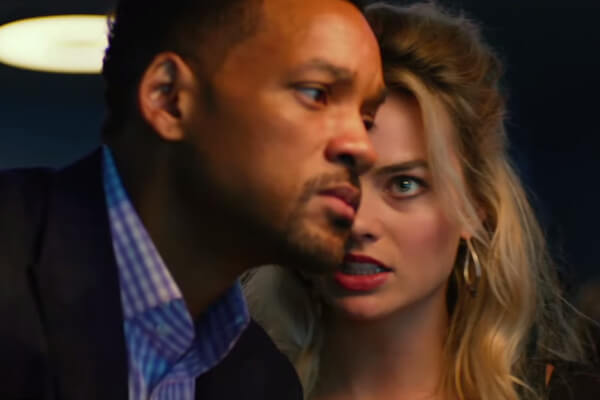 Despite its title and the fact that Will Smith continually mouth-dumps exposition about how pulling a con requires attention to detail, Focus is hella sloppy. It’s not just that genuinely thrilling “who’s playing who” moments bump up against a holistically unbelievable romantic core, it’s that writers/directors Glenn Ficarra and John Requa never decided on the movie’s tone. Lithe and funny until it’s leaden and obtuse, Focus would be pleasantly forgettable were it not for Margot Robbie, who is announced here as a capital letter Movie Star.

Smith plays Nicky, a lifelong conman who can’t go a sentence without mentioning “the game.” He’s been in “the game” for too long, is out of touch with “the game,” all he knows is “the game.” One time, he gamed the game so hard that the game got gamed. Robbie plays Jess, whose backstory is told in a single sentence and has something to do with dyslexia (for serious). She wants to be a criminal. Not a popular choice on career day, but she loves pickpocketing and asks Nicky to let her be a part of his thieving, scamming team.

He acquiesces to her wishes during The Super Bowl, which cannot be called The Super Bowl in the movie because the NFL protects its licensing more than its players or their wives. After the team steals a whole bunch of crap, Nicky ditches her, a move made only crappier because they were previously doinking. Then, years later, the two both wind up circling European racing magnate Garriga (Rodrigo Santoro), and everything becomes even more wildly convoluted.

Nothing in Focus is explicitly bad, just “off.” Like how minor characters Farhad (Adrian Martinez) and Liyuan (BD Wong) seem to be ripped from a cartoonish broad comedy or how Nicky is sometimes as clever and observant as Benedict Cumberbatch’s incarnation of Sherlock Holmes but then goes dumb for a few scenes. Even Smith’s costuming and aesthetic feels slightly askew; it’s difficult to make Big Willy look uncool, but the movie manages a few times.

The only constant is Robbie, who really deserves some movies where her clothes stay on the whole time, thanks. Trotted out as a live-action, oft-nekkid Barbie doll in The Wolf of Wall Street, Robbie is charismatic and enthralling in a way reminiscent of Pretty Woman-era Julia Roberts. Considering that Smith spends most of the movie squinting at her and gives her all the genuine romantic attention one gives a day-old Filet-O-Fish, she basically summons chemistry solo. In an industry obsessed with the superficial, here’s hoping Robbie gets recognized for her all-too-rare inner sparkle and not just her allure.

Focus is a true late-February release: Neither hopeless trash to be jettisoned in January nor a potential breakout hit scheduled for early Spring. It’s also neither the nail in the coffin of Smith’s career nor a sign The Fresh Prince is back. Actually, come to think of it, Focus isn’t really anything specific. Is that irony?