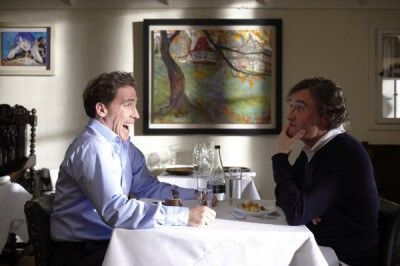 The Trip isn’t a movie.

That’s not criticism: It’s actually a six-episode BBC television series that was edited into a two-hour movie for easier transport and consumption. Having watched the edited version of the modestly endearing but repetitive antics of Steve Coogan and Rob Brydon, the thought of folks tuning in for six straight weeks seems a bit daffy. Without any narrative backbone, the whole thing kind of collapses into a jiggly pile of mild giggles.

Coogan and Brydon play versions of their real selves. One assumes that knowing more about their real careers and personal lives, as is likely the case for many across the pond, would aid in some of the more biting aspects of the meta-humor. Oh well. Unless profoundly Anglophilic, most Americans will have to be satisfied with the assumption that these two have done something to warrant watching them make characters out of themselves.

Coogan’s girlfriend, Mischa (Margo Stilley), leaves him abruptly to return to America, abandoning him on the eve of embarking on a restaurant tour of the north of England which he agreed to do for a monthly food magazine. Faced with the prospect of repeatedly dining alone, Coogan reluctantly calls Brydon, a dear friend who annoys the crap out of him. Brydon is innocent and a bit addled, constantly barfing up impressions of famous people in public places. Coogan is perpetually miffed and seemingly jealous of Brydon’s sunny disposition, likely because Coogan’s career and love life seem to be imploding in front of him.

Enthusiasts of gourmand pornography can rejoice, as director Michael Winterbottom filled The Trip with copious, exploitive shots of food and eating. While consuming, Coogan and Brydon trade clearly improvised barbs and riffs, hugely endearing waves of comedic patter that make the whole film enjoyable without any significance. Attempts are made to explore Coogan’s devolving sense of self, as he is plagued by dreams of Ben Stiller offering movie roles he will never get in real life. Coogan chases his loneliness up the skirts of hotel workers and photographers, whereas Brydon devotedly and goofily tries to engage his wife in phone sex while doing an impression of Hugh Grant.

But there are no “events” here, no climatic rise or meaningful resolution. Characters do not evolve or change, friendships are not strained or renewed and love is neither found nor lost. Food is eaten. Impressions are done … repeatedly. And Samuel Taylor Coleridge is quoted at length, which is apparently something all British people can do at will. It’s all passably endearing but of trifling consequence and only marginally resembles an actual movie.

There’s nothing wrong with any of this, of course. Sometimes lighter movie fare sits better in the stomach than a hardy cinematic meal. But to continue the dining metaphor: The Trip is a savory appetizer served in place of an entrée. It tastes great, but you’re still pretty hungry after you eat it.