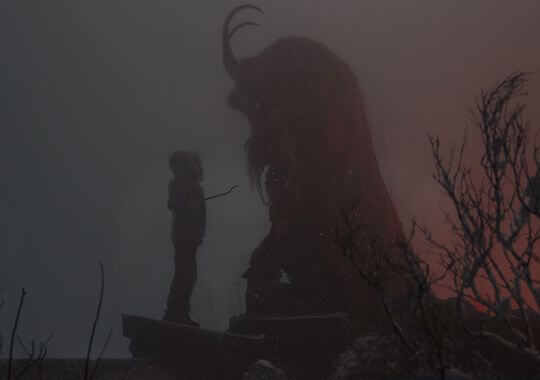 Well…Krampus sucks. In 2015, bad horror movies like It Follows, The Visit, and Crimson Peak, have been well-produced and well-acted, but without any bite or brains. Such is Krampus. In all fairness, the Krampus and its henchmen are solid movie monsters. I just wish they were terrorizing a better monster movie, as this one suffers from a serious lack of personality and wit. But, hey, at least the monsters are fun?

Directed by Michael Dougherty, Krampus is a horror-Christmas-comedy that tries to have its milk and cookies and eat them, too. When a pair of suburban families gathers for the holidays, a terrible wish from a naughty child unleashes the Krampus to wreak awkwardly inserted apocalyptic havoc. Krampus is bogged down when it insists on being this grand, sweeping subversion of Christmas movie tropes…and a subservsion of horror movie tropes…and a mockery of the absurdity of holiday rituals…and an apocalyptic thriller….and a Gremlins tribute. There are a few good movies packed into Krampus, but it never decides to stick with one.

The Krampus itself is mostly limited to appearing as a menacing silhouette. I mean, sure, it’s a great silhouette, but a more thoughtful movie might have given the Krampus more to do. This movie is so concerned with making endless Gremlins references that the army of evil snowmen and Christmas toys usually overshadows the Krampus. Still, they’re all fun to watch, even if the movie never quite delivers the good gory fun that it’s aiming for.

Krampus is never funny enough as a comedy or tense enough as a horror movie (well, except for one scene), and the cast is never charismatic enough for us to be interested when demonic dolls are devouring them. Even the Gremlins references are too on-the-nose to properly evoke nostalgia. For all of it’s lamenting over the death of yuletide optimism, Krampus was bad enough to leave me fairly cynical. The year has come and gone without a single good horror movie. At least Krampus isn’t as bad as It Follows, but it’s still disconcerting that It Follows is much worse than a really bad movie like Krampus, and yet it’s still getting loads of praise.

I enjoyed moments in Krampus. Of course, the creature stuff is good. Allison Tolman and Toni Collete are great as usual but, just like the Krampus, they’re simply not given enough to do. Nearly every review I’ve read for Krampus has mentioned the rooftop chase near the beginning of the movie, and I can see why. That rooftop chase is the only scene where Krampus seems to realize it’s potential. The rest of Krampus is a bad movie. Who knows? The audience that I saw Krampus with seemed to enjoy it, but I can’t imagine they’ll be eager to add it to their Netflix queues come next holiday season.

In short, Krampus sucks, closing a year of bad horror movies that look good and sound good but that don’t have enough brains to feed their own zombies.