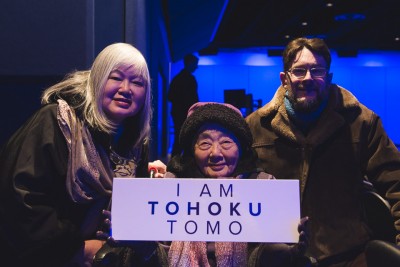 I’ve never understood the concept of “sister cities.” Like, there’s a city in one part of the world that’s a “sister city” to a city in another part of the world. Somebody get a hold of Maury, because I’m confused about who their daddy is. At any rate, the Omaha Sister Cities Association is teaming up with Film Streams to bring a special free screening of Tohoku Tomo, a documentary about the volunteers who responded to the massive earthquake in Japan in 2011. The screening is at the Ruth Sokolof Theater on Thursday, February 5 at 7 pm and will be followed by a Q&A with director Wesley Julian. This marks the start of a year-long series of programs celebrating the 50th anniversary of Omaha’s first Sister City partnership with Shizuoka. Omaha is apparently also “sisters” with Braunschweig, Germany; Siauliai, Lithuania; Naas, Ireland; Xalapa, Mexico and Yantai, China. I did not know that, nor do I understand it.

Something Wicked this way comes! Maybe! Given the fact that Into the Woods was a big fat hit, it’s no wonder that they are actively working to bring another Broadway smash into cinemas. Stephen Daldry is slated to direct Wicked, provided they can get a script done. This hasn’t stopped them from announcing plans to put the film in theaters by 2016. Glad to see that the order in Hollywood is still “announce release date then write script.”

Alexander Payne’s next film is gonna be hugely small! That is to say, Downsizing will follow the story of a man (Matt Damon) who wishes to shrink himself to consume fewer resources. In exciting news, Reese Witherspoon has agreed to be the female lead, reuniting her with Payne for the first time since Election. No word yet on where the film will be set, but given Payne’s Omaha roots, I’d like to officially offer my house to Damon and Witherspoon, should they need it.