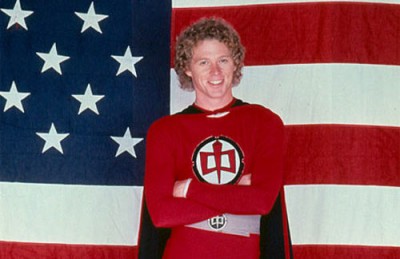 How much more can failed 1980s television show “The Greatest American Hero” give us as a people? Not only was it groundbreaking for its willingness to cast a dude with a perm as a superhero, but it provided the greatest theme song ever with “Believe It or Not.” That song, in turn, became the basis for “Seinfeld” having George Costanza record his amazing musical answering machine message “Believe it or not, George isn’t at home.” You’ve done enough, crappy 80s sci-fi show. And yet, now comes word that Phil Lord and Chris Miller (The Lego Movie, 21 and 22 Jump Street) are bringing us a reboot of the hapless hero who discovers a suit that gives him powers. If only we still had answering machines. If anybody other than They Might Be Giants covers the classic theme, so help me…

Well, well, well… Joaquin Phoenix, the man who once pretended to quit acting and become a rapper, is about to ink a deal to headline Marvel’s Doctor Strange. While, on the one hand, imagining Phoenix as a sorcerer who travels between worlds and messes with the supernatural seems perfectly reasonable, the thought of him signing one of those epic multipicture deals Marvel forces upon its actors doesn’t. I’m excited, but ask Ed Norton how that whole Hulk deal worked out.

Chloë Grace Moretz is a remarkably talented young actress. So you’ll have to forgive her for her recent statements about Kick-Ass 3. She pointed to the fact that Kick-Ass 2 was the most pirated movie last year and concludes that the reason why there won’t be a third film is directly linked to that fact. In reality, there won’t be a third film because nobody wants to see a third film, via piracy or otherwise. While I’ll be the first to point fingers and shame movie stealers, this would-be trilogy didn’t die at the hands of pirates but was skewered by the pens of the writers for the last movie.