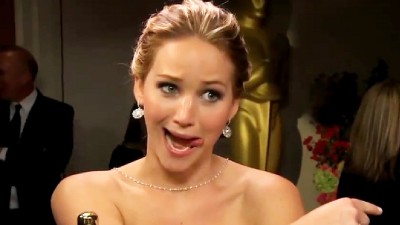 I’m growing increasingly okay with this whole Ghostbusters 3 thing. The decision to hire director Paul Feig and cast the team as all women feels inspired, as the current number of movies anchored by a team of women this year stands at…hold on a tic, lemme check…zero. It stands at zero. News broke this week that Rebel Wilson and Jennifer Lawrence have both spoken to Feig about the film. The former is expected, but the latter is super promising. Lawrence is flat-out hilarious yet continues to choose roles where humor isn’t permitted. Seriously, has anyone even smiled in The Hunger Games? I can’t say I’m fully excited yet, but I have moved from “meh” to “maybe.”

If you haven’t heard, there’s a significant chance that North Korea hacked the Sony Pictures website in retaliation for the upcoming Seth Rogen and James Franco comedy The Interview. That’s a real thing; a movie by guys who make fart jokes may have prompted cyber terrorism from a corrupt regime. Less  awesome than that is the fallout for Sony, who has had to endure private and insensitive emails becoming very, very public. From execs calling Angelina Jolie a spoiled brat to others suggesting Kevin Hart is a whore, it’s basically like the Internet got their hands on Sony’s “Burn Book.” As intrusive and bad as that all is, let’s take just a second to put mansplainer Judd Apatow on blast. He took to twitter to state this: “Releasing private Sony e mails to hurt people is the same as releasing nude photos of Jennifer Lawrence.” No, Judd, having private correspondence leak is not the same as having your body violated by the eyes of every horny wanker with an internet connection. I look forward to Apatow’s next movie You’re Worse Than Hitler.

One bit of actual interesting movie news that came from the Sony leak has gotten a lot of deserving press. There’s a chance that the next Jump Street movie will also be a reboot of Men in Black. Yes, for real. Basically, Schmidt (Jonah Hill) and Jenko (Channing Tatum) would join the secret government agency that handles aliens in the next sequel. Considering how colossally bland and inert the Men in Black series has gotten and how inspired and fun the Jump Street series is, color me gleeful about this bizarre approach. Hell, let’s do this with more stuff! Like, they can reboot the valuable Driving Miss Daisy franchise with the 50 Shades of Grey sequel!