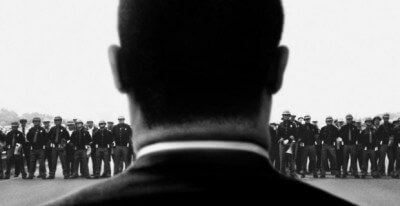 Hey, Hollywood! Yeah, you! You think you’ve got some kinda monopoly on red fabric or what? I’m here to tell you Omaha is doing just fine in red walkable textiles, as Aksarben Cinema is teaming up with the Empowerment Network, the Delta Epsilon Omega chapter of the Alpha Kappa Apha Sorority Inc, the Beta Xi Lambda chapter of the Alpha Phi Alpha Fraternity Inc and the Great Plains Black History Museum for a red carpet premiere of Selma. On Thursday, January 8 at 7 pm, the theater will be “putting on the ritz” for one of the most critically acclaimed films of the year. If that’s not enough, the first 85 people to arrive after 5:45 pm will get a free movie poster with the price of admission. I don’t see Hollywood handing out goodies to fans during their red carpet events…mostly because people are too busy taking selfies with the back of Angelina Jolie’s head, but you get my point.

Of all the debates surrounding a potential new entry in the Ghostbusters franchise, none has considered whether or not fraidy cats will be welcomed. This is to say, we’ve been focusing so much on the comedy angle, we’ve kinda forgotten about that whole “ghost” part of Ghostbusters. Director Paul Feig has now waded into the “pant peeing fear” discussion by promising that the new film, which is sounding more like a complete reboot and will feature an all-female team, will be “scarier than the original.” Good? Is this what we wanted? I mean, it pleases me to no end because my cohost on the Movieha! Podcast, Matt Lockwood, soils himself at any marginally frightful incident.

You win some, you lose some. Ryan Gosling is lusted after by most women and some men and has riches and international fame. It seems only fair that his directorial debut is a turd. Lost River, which has gotten reviews that range from “Ew” to “Make it stop,” will not be released in theaters. Despite featuring Matt Smith, my favorite actor to take up the mantle of The Doctor in “Doctor Who,” the film will be dumped onto Video on Demand sometime in April. So take that, Gosling! Now your life is only MOSTLY perfect!