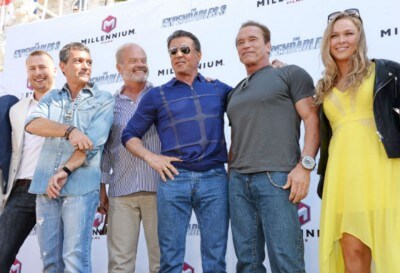 I am not in any way advocating that you find it, because I abhor movie piracy, but news broke this week that The Expendables 3 began appearing on torrent sites. Unlike previous incidents, like the infamous one where a work print of The Wolverine was uploaded, reports say this cut is the final product. I mention this because it will be worth watching if the third film fizzles opening weekend. Because if it does underperform, it would be because of the leak and only the leak and not because they added the recently released from prison Wesley Snipes and everyone’s favorite Jew-hating, wife-taunting nutball, Mel Gibson, to the cast.

Robert Downey Jr. intimated that he is open to appearing in Iron Man 4. He’s currently under contract only for Avengers 2 and 3, but as it turns out, making insane piles of money is tempting. While he didn’t say outright it was even in talks, he just wants it known that if someone is going to pay him millions upon millions of dollars to do a thing, he will do that thing.

Don’t worry, America: Roberto Orci confirmed that the upcoming big screen Mighty Morphin Power Rangers WILL hold true to the established show continuity. Thank God, am I right? I mean, if they didn’t respect that artistically crafted and complex web of storytelling the Rangers are known for, all we’d have is spandex and ridiculous rubber monsters.

There’s a new rap song called “Shell Shocked” that is about the Teenage Mutant Ninja Turtles. It is performed by beings called Juicy J, Wiz Khalifa and Ty Dolla $ign. I’m not saying it’s a good thing or a bad thing, just that life takes another swipe at Vanilla Ice, who now isn’t even the only rapper to have a mutant ninja turtle track.