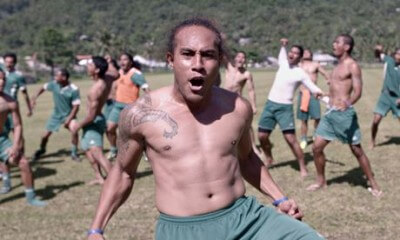 I have “the fever.” No, it’s not curable by penicillin or cowbell. It’s World Cup fever, which has given me an understanding of what constitutes offsides in soccer and the knowledge that Ronaldo is a person and not a corporate mascot of some kind. Seems I’m not the only one “futbol happy,” as Aksarben Cinema is heading Next Goal Wins our way. On Wednesday, July 9 at 6:30 pm, the theater is holding a screening of this documentary about “the worst football team on earth” from American Samoa. This real-life Bad News Bears story promises heart, humor and a lot of guys not allowed to use their hands to touch the ball.

The obsession with remaining young has now spread to our theaters, as Film Streams is once again launching their Summer Forever Young Series. It starts on the Fourth of July with A Hard Day’s Night! That’s…kind of an odd choice, promoting British content on the anniversary of our rejection of the United Kingdom. From there, the series will include Eleanor’s Secret (which is that she regrets being named Eleanor), John Hubley Centennial Celebration (because what kid doesn’t love John Hubley?), The Parent Trap (hopefully not the Lohan one…because Lohan…), Anina (which is not how you say “nine” in Italian) and Nocturna (which is a nickname we gave our friend who left parties early). Tickets are just $2.50 for kids! Head to filmstreams.org for showtimes!

I’m not one of those elitists who look down on Young Adult literature from atop their perch of intellectual superiority. If a book is good, it’s good. However, I’ve got no need for something like The Fault in Our Stars because inflicting sadness upon myself is not a hobby of mine. I am, however, potentially excited for the next adaptation of a John Green novel. That’s because talented director/actress Sarah Polley is now helming Looking for Alaska, which is presumably a movie about 2007’s Miss South Carolina. Pairing a director like Polly with virtually any content means I’m in, even if it’s another weepy-eyed extravaganza.