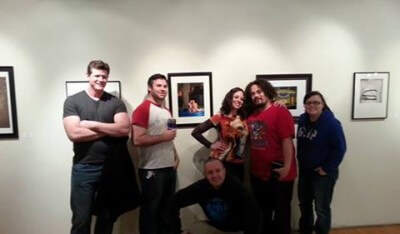 If you know me, you know I am all in favor of skullduggery. I am also all in favor of SkullDuggery Theatre Films, a local group that is set to release its first film, Bent Over Neal, later this year. To celebrate the news Aksarben Cinema will be premiering the film on Oct 23 at 7 pm, SkullDuggery opted to drop the trailer. Why do we say that things like movie trailers and music albums “drop” as though creative people can’t hold things well? At any rate, props to a film with all local cast and crew that promises to feature a smattering of local music. Actually, I chose the word “smattering.” It may be a smorgasbord or sampling; I make no promises.

The things human beings are capable of doing while facing unspeakable atrocity astounds me. Like, you know what I wouldn’t think of when facing a civil war? “We should start a band.” But that’s what Sierra Leone’s Refugee All Stars did, and you can find out all about it. On June 4 at 8 pm, the Slowdown will hold a free screening of a documentary about the origins of the band in Guinean refugee camps (which do not sound fun at all). The film shows how they went from unimaginable horror to an international music career. If only you could see them perform. Oh, wait! You can! On July 5, the All Stars are performing at the Slowdown at 9 pm, with tickets just $15. Triumph in the face of unspeakable tragedy is my favorite thing next to a quality nap.

Calling all local filmmakers! I mean that in the rhetorical sense, as my cellular plan isn’t good enough to call you all. So spread the word: Film Streams is once more asking for entries for its 2014 Local Filmmakers Showcase, which features work from anyone in Nebraska, Iowa or South Dakota. You can get all the details on their Web site. You have to get your film in by July 25, 2014. Don’t worry if you haven’t started yet; pretty sure Adam Sandler movies are shot on a long weekend.