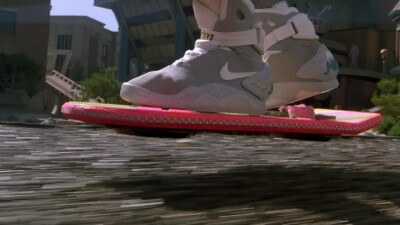 We’ve been patient. But now, finally, we are getting the single most important product a movie ever promised us. Hendo Hover is determined to make real, usable hoverboards in 2015. You heard me. Marty McFly’s floating skateboard from Back to the Future is allegedly coming next year. I knew we had staved off the apocalypse to this point for a reason.

Oh snap! DC Comics and parent company Warner Bros. may be underachieving at the box office compared to the Marvel Comics goliath right now, but they just announced something that earns them mad props: They want the director of Wonder Woman to be─GASP─a woman! There is a certain degree of irony, in that the first major superhero blockbuster adaptation to be helmed by a woman started as a comic with S&M undertones, but still! Undoubtedly, Mimi Leder, Kathryn Bigelow and Lexi Alexander are being eyed, but I kind of hope a lesser known lady filmmaker gets the high-profile assignment in order to add another name to this way, way, way too short of a list.

Rumors launched this week after IMDB listed the running time of Ridley Scott’s upcoming Exodus: Gods and Kings as 200 minutes. If you’re like me and think numbers are icky, I’ll tell you that’s almost three and a half hours long. The studio says the final cut will be around 140 minutes, but it’s unclear which is accurate. All that has been confirmed is that this is going to be a long, long movie that features white people as Middle Eastern characters while minorities play slaves. What I’m trying to say is, I wasn’t about this crap anyway.

Director Jeremy Saulnier is following up his buzzy thriller, Blue Ruin, with something insane. Green Room is a movie about a young punk rock band who get trapped after seeing a horrible crime and must fight for their lives against a gang of white power skinheads. Cool, right? You’re not ready… The leader of the skinheads will be played by Patrick Stewart. I only regret that I am not currently watching this movie.