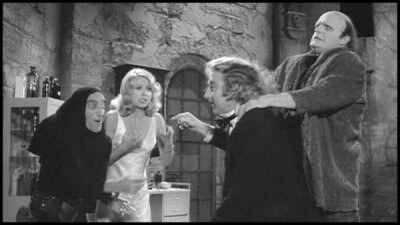 The root of the word “fan” is actually “fanatic,” which sounds more maniacal and describes me after the Chicago Bears lose (again). This explains why Aksarben Cinema is naming their ongoing series of classic films “Cinematic Fanatic” and not my suggestion “Really Good Old Movie Films!” Guess what they’re starting with, given that it’s the spookiest month of the year? Nope, it’s not Adam Sandler movies, but we’ll get to him in a minute. Together with 96.1 KISS FM, Aksarben is unspooling classic horror flicks this October, including Friday the 13th, Young Frankenstein, Paranormal Activity and Halloween. Head to aksarbencinema.com for showtimes and ticket information.

Anyway, back to Adam Sandler. The dude signed a groundbreaking, first-of-its-kind contract to make his next four movies exclusively for Netflix. I shit you not, his first statement suggested he did this because Netflix “rhymes with wet chicks.” Nothing has made me respect Hulu and Amazon Prime more.

This next bit isn’t news. It’s news about news. Actually, it’s news about news you should avoid. Star Wars Episode VII spoilers are out there. And not the fun, light kind of spoilers. The kind you can’t unread. The kind that ruins the moviegoing experience. I have managed to avoid it and hope you do the same. Just know that if you’re contemplating clicking on any “rumors” from here on out that someone posts into your social media feed, it could absolutely obliterate what people are increasingly saying may be an awesome Star Wars movie.

Dwayne “The Rock” Johnson is going to star in a “raunchy” and “fun” adaptation of Baywatch, a show that was neither of those things. While Hollywood’s inexplicable obsession with using existing brand names for generic content (this will basically be a movie on a beach) continues to offend me and entrap even the strongest among us. Sorry, Dwayne.