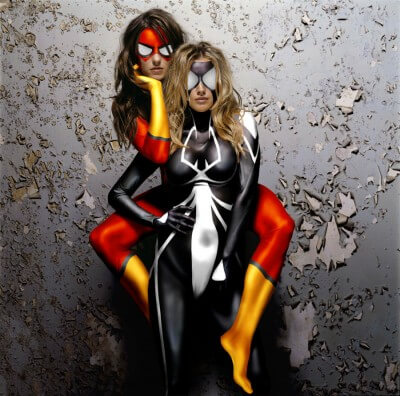 Sony Pictures has been bumbling around with the property they bought from Marvel, Spider-man, unable to generate even an itsy bitsy spider’s worth of excitement. First, Sony announced plans to give Spidey’s villains their own movie without him, to which the world cried out in one unified voice: “meh.” Then, Sony toyed with rebooting the entire series for the third time, an idea that earned a collective groan. Now comes something…different… A rumor surfaced that the studio is contemplating a “Spider Women” type movie, in which the females in Spidey’s universe would all buddy up against evil or something. The idea is in the gestation phase, but the thought of a female-driven superteam movie is pretty B.A. Well, at least it would be if a studio capable of making it good were handling it.

Keeping up the lady hero business, DC and Warner Bros. had a little leak of their own. That is to say a rumor broke out, not that they peed a little. Wonder Woman, which is presently scheduled to be the first major superhero movie to have a female lead, may be set in the 1920s. Ooh! That actually sounds like a good idea, so there’s virtually no way it will survive through the production process. Personally, I think Wonder Woman is a character who is better suited for an earlier era. So it will suck that much worse when a studio suit points out you can’t have product placement if it’s set in the roaring twenties.

You know what, let’s do this thing! Let’s make all three of these news items about female superheroes! Marvel Studios announced a slate of about a billion films that run from next year until the planet can no longer sustain human life. Interesting tidbits included news that Doctor Strange is gonna happen, The Inhumans (basically space X-men) is in development and Avengers 3 will be split into two parts. But the two biggest bombshells were Black Panther, with actor Chadwick Boseman already cast, and Captain Marvel, the first solo female movie from Marvel Studios. It’s that last one that’s particularly exciting, as Captain Marvel is such a cool character with such a rich history to pull from. My early recommendations for casting that role are Anna Kendrick or Léa Seydoux, but really, so long as they don’t cast someone like Kelly Cuoco, I’m good. Oh god, I just gave them that idea, didn’t I? Dammit.