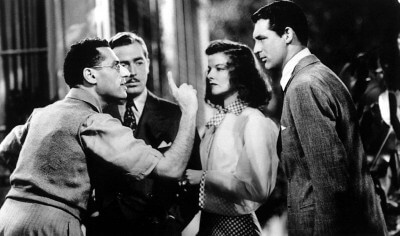 Are you in love and totally broke? Have I gotta a great Valentine’s Day date planned for you! Film Streams just announced an 11-film repertory series featuring Katherine Hepburn and will have a free screening of The Philadelphia Story on Valentine’s Day, sponsored by Borsheims. So you can say “I got you something from Borsheims for Valentine’s Day” and then take your significant other to the free screening! I see no flaws in this plan.

Let’s talk about The Oscar nominations, shall we? Always contentious and full of “snubs,” this year’s crop is the worst in ages because apparently people of color don’t star in movies anymore. All the acting nominees lined up together would look like a huge set of pearly white teeth. This is, in part, because there still aren’t enough prominent roles for people of color in movies, and also because the Academy voters are all like a thousand years old and really white themselves. You need to understand how grave this snubbing of Selma truly was. Cinematographer Bradford Young may have had two of the best scenes of the year with the church bombing and Bloody Sunday sequences. Director Ava DuVernay got breathtaking performances from even the smallest of players and would have been the first black woman ever nominated for the award. It’s 2015… David Oyelowo took the immeasurable burden of portraying MLK and absolutely delivered. And screenwriter Paul Webb? You’re not even ready for this: The studio didn’t own the rights to King’s actual speeches. So Webb had to write what sounded like speeches from the greatest orator in history. But by all means, give Boyhood, which was largely improvised, a screenwriting nod. I hear you, people who are bitching about The Lego Movie being snubbed. But the biggest problem isn’t that the Academy didn’t award yellow toys. My only hope is that this hubbub may finally be what causes the Academy to reflect on their voting body. It’s far, far overdue.