Sorry I’ve been gone. Things are busy, busy, busy right now, and honestly nothing other than Sundance sales were happening much last week. Also, did I mention the busy? Because I was crazy with the busy. And I don’t mean things like “watching great television like ‘Community’ all day” busy. I mean “Dear God, grant me the opportunity to pause this madness long enough to void my bowels” busy. I far prefer the former kind, but the latter kind does make for some great personal drama.

So why did I return to you now? It’s neither the turning of the tide nor the hour of your greatest need. I just a little breather is all. Oh, did I mention my computer died last week? Yeah, I like to think right now Heath Ledger is up there typing a letter to Chris Nolan on my old laptop. It begins “F**king BANE?” That brings us to the biggest news of the day, along with other smaller things of note.

In what can only be interpreted as an act of revenge for the poaching of Sherlock Holmes, a Brit has been cast as Superman. One can only hope this doesn’t escalate and leave us with Mickey Rourke playing Princess Diana. Here’s the bloke who is going to don the red undies. 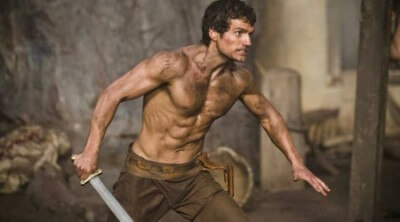 K. He looks like a brunette that has ripply-dipply abdomen parts. Presumably he can speak in ridiculously obvious platitudes and looks good in slow motion. With rumors that Superman himself will appear as all CGI, I can only suggest that any blockhead considering it looks at the eyeball abortion that is the Green Lantern costume. If you look at that green and black monstrosity for more than 30 seconds in a row, your sperm count drops in half and you lose 52 IQ points. I doubt they’re going that route, so we’ll likely see Cavil’s bulging boy parts in the spandex we love so much. Dude was in a show on Showtime (which is like Burger King to HBO’s Mickey Ds) and was actually semi-cast in McG’s would-be version of Superman that JJ Abrams wrote. Thank god that didn’t happen, as the things that have leaked about that draft are almost as bad as McG’s direction. I don’t know what else to say about the casting of a generic white boy who looks like Joe Q. Average (sorry, he’s British…what’s the British for “John Q. Public?” Gaylord S. Foppington?). Yay for accent suppression?

Bond may have a new friend-o 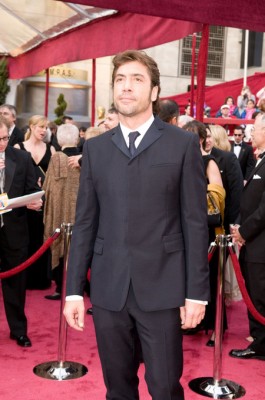 That may be Blofeld. Okay, maybe not Blofeld (please be Blofeld), but someone close to Blofeld. Rumor has it that the offer is out to have Javier Bardem (currently taking some time rearing the seed of Penelope Cruz, whom he totally impregnated) play the big, bad Bond baddie. Ever since the last two movies gave us the epic villains of What’s Hisname and Someone Else, I’ve been drooling at the thought of an A-list actor taking on Daniel Craig’s bad-ass Bond. This would totally fit that bill. As much as I was hoping for an out-of-left-field casting choice (Will Smith, for example), Bardem more than has the chops to do this and he fits an awesomely interesting aspect: He’s charming as shit. I mean, those attracted to dudes are going to have a field day with this one, with the uber-suave Craig muscling up against the foreignly drool-worthy Bardem. Hell, I like chicks and this is getting me all worked up. Point is: We may finally have a perfect foil for a damn-near-perfect Bond, which was the ONE thing this new installment of the superspy had been missing.

The King’s Speech is a perfectly inoffensive way to spend two hours. For history buffs or those with a big ole Colin Firth addiction, I highly recommend injection into your eyeballs. But facts being facts, it’s just an okay movie. It does nothing particularly great, offers no new insights or takes on anything, and has all the punch of a muppet’s high-five. It’s milquetoast. It’s tapioca pudding. It’s something that award shows can reward ad nauseum because it SEEMS better than it is. It’s the sports car with the Minicooper engine. I saw it less than a month ago and struggle to remember individual scenes. Whole storylines are dropped (like Geoffrey Rush’s character’s acting career), big moments are presented placidly (his final, titular speech has all the grandeur of a shitty local radio show), and the exchanges between the two skilled actors fall so far short of something like Frost/Nixon that it’s insulting…and that was a damn Ron Howard movie! Still, it’s harmless. It means well. And I don’t want to hate it. But I do.

Why? Because by virtue of Tom Hooper undeservedly winning the DGA award, the movie has all but wrapped up the Oscar sweep. Yeah, it’s going to be an uneventful evening of celebrating something with less punch and pizazz than Crash or Shakespeare in Love , two other movies that weren’t the best movies of their respective years but resembled them enough to fool everyone involved. The King’s Speech is destined to be an answer you stretch to remember while playing Trivial Pursuit. The King’s Speech is going to be the movie you can’t remember when someone asks “What won best picture last year?” It’s mediocrity at its finest, and championing it pisses me off. I don’t mind that you like it if you do. I get it, in fact. Just don’t tell me it’s better than Inception …or Black Swan …or Toy Story 3 …or The Social Network …or True Grit and so on and so on. This is the movie I end up despising even though it’s just okay because I loathe the celebration of middling works. Enjoy your brief reign of memorability, The King’s Speech . We’re going to have forgotten you exist by this time next year.

And on that thoroughly grumpy note, Happy Monday to ya and I’ll see you tomorrow!