In a mere 4 days, I’m live-tweeting the Oscars. I like saying that because it sounds like I’m going to be there. I won’t be. I’ll probably be pantsless on my couch, sipping inexpensive whiskey. This also means that 2 days from now I give you all the winners, along with my rants about who should win (cough, Inception , cough) but won’t. Again, to all my friends on Facebook (which has my twitter feed feeding it), be warned. Now, on to today’s news!

Between 1979 and 2005, Terrence Malick released 2 films he directed into theaters. He’s about to release 3 in the next 18 months. The first, Tree of Life promises to be another intellectual, overly-drawn-out drama that supposedly “covers the entirety of human existence.” It has a companion piece of some kind that is going to be shown in IMAX, but the details of that are more convoluted than the narrative of Thin Red Line . The other narrative film he’s releasing is a romance that finished filming already, so we ARE in fact going to get it. Oh, and it looks like this: 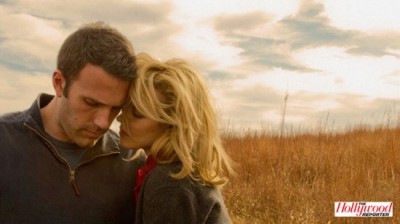 Also starring Javier Bardem, this totally secret romantic endeavor looks gorgeous, right? I mean, slap the words Nicholas Sparks on there and you’re in trouble, but so long as the romance is being provided by an artist and not a crapmaster who applies disease A and contrived character B to get generically titled romance C (“The Shooting Star” by Nicholas Sparks; it’s about a girl who may spontaneously combust who falls for a boy in the coast guard…I made that up, but you see how easy it is). I’m excited at the thought of Malick doing something like this, and the picture only further stirs my fancy.

Nerds do nerd stuff, we reap the benefit

I was going to post the images that Slashfilm and others ran about this story, but the payoff is so damn small I’ll just cut to the chase. Using incredible nerd detective skills that involve breaking down every frame of the admittedly bad-ass Super 8 teaser, the dork avengers of the Internet have determined there’s a good chance we’re getting a full trailer on 3/11/11. Cool. That took someone days and days to figure out. Pity them.

Banksy may just show up after all

For fans of things that are awesome, Banksy is the shit. Not only is the street artist/director of an Academy Award-nominated documentary ( Exit Through the Gift Shop ) totally awesome, he’s totally secret about his identity. That’s one of the mind-bending things about his aforementioned film, and one of the most frustrating things for the folks running the Oscars. Because NOBODY knows Banksy’s real identity, how will anyone know if the person who steps up to win (presuming he does) is actually Banksy. There was talk that he wouldn’t even attend due to the Academy’s insistence that nobody be allowed onstage in a mask, but the president now admitted he’s kinda-sorta totally cool with it if Banksy shows in a monkey mask or something. 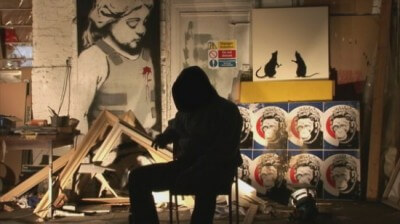 So first, he has to win (which I doubt…because the Academy isn’t that cool). Then he has to somehow get into the theater without letting anyone know who he is (you can’t well sit in the audience with a mask on…can you?). Then he has to get on stage, all of which the president of the Academy says is somewhat possible. My prediction is this won’t happen due to logistics and whatnot, but count me among the millions who are praying that it does. It’s about the only thing that can save a night dedicated to a moderately accurate, polite-but-boring best picture winner that we’ll all forget about by this time next year.

There are a few other minor notes, like someone buying the rights to “Robots vs Zombies,” a comic book about…yeah, I know, you get it. But nothing feels important enough to waste our time with. So I’ll leave you with a reminder to prepare yourself for Oscar madness in a few days by following me on Twitter now!