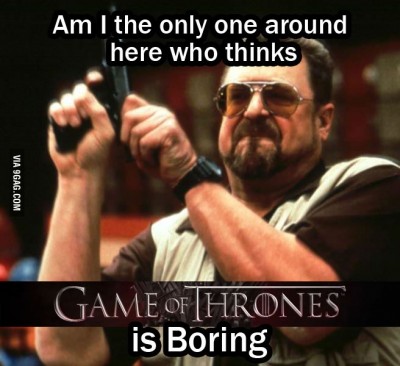 Disclaimer 1: You don’t want no part of this if you aren’t completely caught up with this season of “Game of Thrones.” HERE THERE BE SPOILERS.

Disclaimer 2: I am a fan of “Game of Thrones.” I like it. I think it is good. I will never stop watching it. I am not about to convince you the show is bad.

While by no means have I surveyed each and every wrap-up, summation or critical response to every episode of GoT’s fourth season, I have read many. I have also discussed the show with tons of friends and critics. By and large, all of them heap praise on it, finding few flaws save for the continued insistence of rape as a lazy, gross, awful storytelling device.

One. I have found literally one friend who shares the sentiment I’m about to express.

You guys… “Game of Thrones” kinda sucks this year.

Sorry, but it does. Setting aside (for now) the biggest criticism of the show this season (Jaime raping Cersei on their dead son’s corpse…which is a HELL of a thing), I have a much more basic complaint: Nothing is happening. Like, nothing at all.

When I say this, I tend to get a combination of three reactions:

1.) Waiting 10 hours for something of importance to happen is a fool’s game. Maybe you got time for that, but I don’t.

2.) Joffrey bit it in the second episode. Since then, everybody just talks about that one thing that happened this season. We know who killed him. Move on.

I will defend until my death the slow development of characters in a show. I loved “Lost” less for the mystery and more for the way I knew those fictional people so damn well. But development requires progress. Not one character has changed in any way this season. Their locations have changed in some cases. But we haven’t seen someone go from passive to assertive, from weak to strong or strong to weak, from confused to educated, from directionless to focused. They’re spinning their wheels, the lot of them.

Let’s start where most conversations about the show start: Tyrion is still being jobbed by his douchebag dad. In last night’s episode, we heard what is, by my count, the third lengthy retelling of his tragic birth. We. Friggin. Get. It. He’s motivated by being an outcast from his family. Cersei and Tywin pick on him. This is not new. Yes, he’s now “on trial” for the murder of Joffrey, but apparently there’s no such thing as the right to any sort of speed to that trial in Westeros. People lost their collective shit last week when he angrily told everyone in King’s Landing they suck. He’s done that before, guys. He kinda does that all the time. And not only that, but it marks absolutely no change for him. He’s not suddenly standing up for himself; he’s been pimp slapping kings for two seasons now.

Let’s do the rest of these characters super-fast, just to show you how wrong the suggestion that this season has done anything to further anyone either by plot or by characterization:

Jaime – He has spent the season conflicted about the role he has in the family, bitching about his missing hand. That and raping his sister on his dead son’s corpse.

Cersei – True, she gets to cry about Joffrey’s death, so she gets +1 for something new. But…she’s spent the rest of the season plotting against Tyrion but not executing anything. See seasons 1-3.

Daenerys – This is the best example, hands down. She is LITERALLY retaking cities she has ALREADY taken before. Every episode for her goes like this: “Khaleesi, killing all the masters may be bad.” “JUSTICE AND STUFF! Hey, has anybody seen my dragons?”

Jon Snow – Still knows nothing. He’s spent the season trying to get people to do something, anything to stop Mance Rayder. Nobody does anything. He led the raid to reclaim a fort and killed…some bad people that didn’t even get names.

Margaery – Still wants to be queen and willing to marry whoever!

Reek – Almost got free! But…nevermind, back to the cage!!

Arya and the Hound – Still taking the longest, slowest journey I’ve ever seen two characters take. They got lapped by a tortoise last night, I think.

Look, I get that the books are slow burns. I get that people who like epic fantasy love deliberate pacing. If you love it, that’s totally awesome. I’m glad you get a show that delivers what you want how you want it.

Me? I’m judging this as a TV show. And as a TV show? This season is glacially paced. It is getting downright irritating. Here’s more proof: Pretend you had just finished watching season 3. You haven’t watched a SINGLE episode of season 4. I could catch you up in two sentences. For real.

1.) Joffrey was killed, Tyrion is on trial for the murder and Littlefinger helped Sansa escape because he wants to doink her.

2.) Everyone else is doing the same thing they were last time you saw them.

Really think about it. You may miss a few minor details, but with that first sentence you could go from Episode 10 of Season 3 to Episode 8 of Season 4. That’s NOT good TV, y’all.

I know a payoff is coming. I know it. But I want it on record that it physically cannot justify what has been the most lackadaisical 7 episodes of a show that only gets 10 episodes a year. Oh, and now is where GoT’s other sins come in to play.

It’s not easy to get past the troubling treatment of women in the show, but it’s certainly easier when the show is moving along. You don’t spend as much time wallowing in filth. This season has been so filled with abuse and assault, so chock-full of the grossest sex stuff, that it has almost become the focus of the show again. To say it, just because nobody else is: “Game of Thrones” is in danger of lazily letting the worst of itself exceed the best.

I’m sure it will pull its fat from the fire. I’m sure it will be mesmerizing. But for a show with this kind of fanatical viewer and critical adoration, I expect more. To put it another way, here’s what would be my rankings for the top 10 shows on all of television for the 2013-2014 season so far:

Yeah, it’s the ninth best show I’ve watched this season. That’s a real thing I just said. I know this has been a long, rambling takedown, but I’m really not saying the show is bad. I’m more concerned than anything. While the last 2 seasons left me so enthralled, this season is leaving me demanding they get on with it.

TLDR: Step up yo boring-ass season, GoT. You on notice…