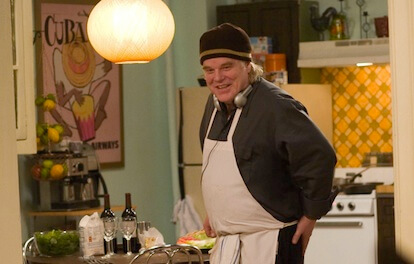 What’s a thanksgiving movie? I’ve been wondering that myself. Though I was raised in one of those few Nebraska families that didn’t watch football all day, I’m struggling to remember the sort of things we did watch after refrigerating the sacrificial bird’s remains.

The simplest answer to the question, for my purposes here, would be movies that take place during thanksgiving – of which there are few – or, stretching just a little, movies about food.

I found a couple that fit that bill well enough, but after perusing the massive Netflix Instant Watch library, I realized there there were also several things I’d really hate to see while in the throes of a food-coma.

Fine, food-related film. And they all, in one way or another, take a crack at the indispensable and frequently frustrating other half of the holiday: family.

Gosford Park (2001) – Robert Altman’s sprawling murder mystery/comedy is set in a huge English mansion. The characters are divided among the wealthy guests upstairs and the help toiling downstairs, but the whole cast is made up of some of Britain’s finest (Helen Mirren, Kristin Scott Thomas, Michael Gambon, etc). Food plays a part, but its the sense of barely contained chaos that might ring most true on turkey day.

Jack Goes Boating (2010) – Philip Seymour Hoffman ends up being the best actor-turned-director in recent memory. Go figure. He also stars here as Jack, a reggae loving limo driver (see hilarious image above). Heartbreaking, beautiful performances from all involved (Amy Ryan and John Ortiz, particularly). And it’s on this list because a pivotal emotional point revolves around one labored-over homemade meal.

The Trip (2010) – Not about thanksgiving, and not really even about food, although the premise is this: Steve Coogan and Rob Brydon, English comedians playing skewed versions of themselves, tour the finest restaurants in the north of England. Rob is happy and well-adjusted; Steve is far from it. Funny, moving and probably the most quotable movie released in the states this year (especially if you do a good Michael Caine impression).

Perfectly fit for streaming on Wednesday or Friday or any other day. But on thanksgiving: avoid!

The Discreet Charm of the Bourgeoise (1972) – In one of Luis Buñuel’s best films, a group of really awful people sit down to dinner but constantly find it impossible to eat. Sort of a nightmare vision of thanksgiving.

Food, Inc. (2008) – Unless your extended family keeps well-worn copies of “The Omnivore’s Dilemma” and “Diet for a Small Planet” on their bookshelves, you probably don’t want to know how your turkey spent its last days.