I kind of hate this week. It’s been all full of weirdness and weak. It’s a weak, weird week. Look at what it’s done to me! I’m jibbering and jabbering and I don’t even know what I’m talking about. It’s time to get myself together, if for no other reason than this is the day I expose my junk to you. It may be someone’s first time seeing my junk this week, and I want to make a good first impression. Because once someone has an impression about your junk, they will tell EVERYBODY that impression. “Oh, his junk is lame.” I don’t want that. I can’t have people out there saying “Have you seen Ryan’s Junk? I have, and it is not good.” I want people to say how magnificent it was, how you were surprised at all it contained!

Obviously, I’m talking about my figurative junk…as in the movie news that I deem too small to warrant a full blog post. I realize that it sounded like I was talking about something else, but this is a PG-13 rated site at best. Okay, sometimes I dabble my toes in the R-rated waters…but it always feels like someone peed in that side of the pool. Anyway, as you know, we begin every weekly edition of my Junk Drawer column by looking at the creepy-ass image above from Highlights Magazine FOR CHILDREN and picking an item I write a goofy story about.

Today’s item is the green and red tube in the lower right corner. Knowing full well the cycle of fads, what with the resurgence of skinny jeans and such, Karen knew that if she prepared herself, she could be ahead of the game. Armed with a bedazzler, limited sewing ability, and a passion for ridiculous accessories, she began amassing a staggering number of glittery, fuzzy leg warmers. She couldn’t for the life of her figure out why people had stopped wearing them in the first place, what with how your shins felt like you were wearing pants even though you weren’t and the awesome, raw, potent sexuality they unleashed. She knew it was only a matter of time before the populous awoke and realized that the only thing that would spell their thirst for sweater sleeves you wear on your legs were legwarmers! And she would be ready. Oh yes. She would be ready.

Okay, enough Tomfoolery and shenanigans. Let’s get physical! Here’s the Junk Drawer items for this week.

1.) Everything goes exactly as expected. Zzzzzzzzzzzzz – These bits of news were splashed across everyone else’s Web site yesterday. But I stand from the pack. I mean, do you see other sites out there spending a good portion of time inventing stories about leg warmers and writing suggestive introductions about their junk? I didn’t think so. Look, I didn’t report on these things in depth because I find both of them as shocking as when CNN pundits press a button that turns Kentucky red on an electoral map. Here we go. Peter Jackson will, in fact, shoot The Hobbit in New Zealand despite all sorts of previous problems with labor unions (sorry, this is about New Zealand, so I think I have to use the foreign labour spelling, because nothing says “we ain’t in America” like an unneeded U). Yippee! Look, it’s good news because the films will look the same and it should be filmed there, just for consistency, but honestly did anyone think they wouldn’t be? Put your hand down Guy Who Falls For Got Your Nose.

The other boring news is that James Cameron will be doing Avatar 2 and 3 next.

First off, this is so stupid that he should be forced to have the guy on the right in this picture follow him around during the entire production of these films. “I LOVE THE NAVI SO MUCH I JUST WANT TO BE ONE! Also, I really want Dave Matthews to get back to his roots, you know.” Seriously, take off the face paint and that guy looks like the date rapist in a “Law and Order: SVU” episode. Anyway, I don’t care to see sequels to these films, and just because he said these are his next movies that doesn’t mean anything. Given his track record with his “next” project, we could be waiting until 2024. And by waiting, I mean not caring.

2.) Double-decker Cruise news – Maybe that should read “upper decker” Cruise news because both ideas are kind of stinky. Cristopher McQuarrie, who shall be forever loved in my book because he wrote The Usual Suspects , says that Maverick is the lead in Top Gun 2 . That’s in direct opposition to rumors that Tom Cruise would only cameo in the film. Is he willing to do a full-on sequel? I mean, I guess so. It’s not like he’s too big to ignore the possibility now. I can’t wait to return to the character of Maverick, who has such a rich tapestry of emotions to demonstrate…like boning hot chicks and being angry. I hope the villain is somehow Meg Ryan. That would be awesome. Oh, and in the second half of this news, Cruise was offered a role in the big screen Rock of Ages , which I’m told is a musical about rock music but sounds like it would give me ear herpes. 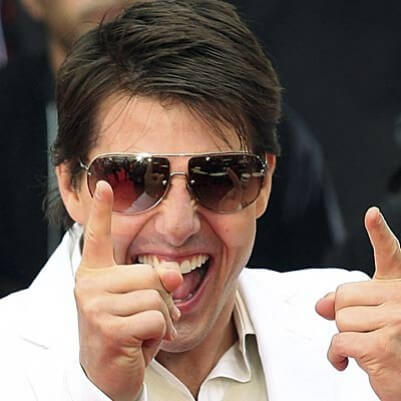 3.) I want Harley Quinn. My ideas are the best . – You have no idea how much I want to be right about the upcoming plot for The Dark Knight Rises . I know I’m probably not, but hear me out. We know that Chris Nolan is meeting with young actresses. The assumption is Catwoman or a new love interest. The process is so secretive that not even the people auditioning know what they’re auditioning for. I so badly want it to be Harley Quinn. Let me tell you how this would work and why it would be awesome.

How it would work: We know that Nolan has said his plan was to have the Joker return in the next film before Heath Ledger died. We know that he won’t replace the role. We also know that, within the film, the Joker was HOPING that Batman would kill him at the end. That was part of his end game, trying to make Batman lower himself. I like the idea that there may have been a plot past that. As in, the Joker either had a contingency plan for if Batman only captured him or a next step if Batman killed him. Either way, he’s out of the picture, which would mean that he couldn’t be the guy doing stuff. So why not have it set up for someone else to take over the Joker’s plan. It’s reasonable and consistent with the character as presented to believe that he would have seen this coming. Don’t make this a revenge movie where his girlfriend takes up his mantle, make this a logical extension of the last film.

Okay, why it’s awesome. Because it keeps things consistent, because it lets you play with the themes you wanted to play with, because its unexpected!!! But beyond that, two more good reasons. 1 – It would automatically represent a great female character for Nolan, who has been accused of not having too many of those. 2 – It would avoid the cliches of every other major villain you could think of. I love this idea. I hope that this is actually what’s happening even though I’m sure it’s not. Nolan, it isn’t too late! Make this happen!

4.) Zach Galifianakis gets my dream job – He’s going to play with Muppets. We don’t know the role, some have speculated he’ll just be a voice. We don’t know how big that role will be, but he’s only going to be involved for a few days of shooting according to rumors. All I know is that his sense of humor is so completely perfect for the off-kilter universe of Muppets that it makes my heart almost as happy as this:

If this was a daily segment it would be the best part of every day. Anyway, Zacky-G is going to chill with the fuzzy folks. All is right with the world.

5.) Trailers, Parked – Two weird ones for you this week. First up is Rare Exports, a movie that involves a creepy take on Santa. It isn’t your goofy slasher Santa movie, but a dark comedic/serious take on the origins of the child judger. Lord does this intrigue me.

Brother’s Justice is another mockumentary, and I’m pretty much over them. It looks kind of funny, and I like the folks involved, I just can’t really get all that jazzed over anything that looks like this anymore. Oh, I’ll probably see it, but I ain’t all tingly about it.

Okay, that’s it gang. Hopefully a weird week means a great weekend, so let’s hook up tomorrow to talk weekend plans. Have a great Thursday.