Read this column or I’ll haunt your fridge

I have two versions of this opening joke.

If you’re in Omaha, this is yours: “Just when you thought you were rid of me forever, I have roared back from the dead to remind you that you’re never really done with me! I’m the Hal Daub of blogs!” If you’re anywhere else, just substitute Newt Gingrich in for that politician reference.

Since last we spoke I (A) saw my Brother-in-Law finally marry his beautiful wife, (B) drank twice my body weight in liquor over 3 days, ensuring that I will never drink again, and (C) have become so exhausted that if there were gun to my head demanding an answer, I’d have to ask to see a calendar to tell you for sure what day it was.

In an effort to save my sanity, I’m doing just one post today, but I’m doing it epic-style, in one huge Catch-up (get it, Ketchup) column.

Here is all the news I missed over the weekend through Monday.

1.) There’s no Jason Bourne in the next Jason Bourne movie – In a great move, Tony Gilroy has turned in a script for The Bourne Legacy , which does not feature Jason Bourne. Interesting approach, not including the title character of your franchise in the next movie in your franchise, but it may make sense. Apparently the plot will allow room for more of Jason Bourne himself down the road, but will broaden the “world” that he lives in by exploring more of the espionage and intrigue that surrounds his existence. Presumably the action will still be shot and cut so crazy it remains incomprehensible.

2.) I’m GLAAD we solved that – When I saw a preview for The Dilemma , I was friggin’ appalled. Not just because Vince Vaughn’s schtick is the only thing more tired than I am.

Although, seriously dude, stop it. No, what was appalling was two-fold: First, that nobody has hobbled Ron Howard yet. His name on a production sheet should come with an asterisk that reads “may cause mental diarrhea and vomiting.” His hacktastic hackitude is ridonkulous. Second, the first thing in the joyless, soulless trailer (of a movie that features KEVIN JAMES for the love of God), is a “that’s gay” joke. Really? Really? It’s 2010, you idiotic douchenozzles! Assuming there was a script, how did that joke even stay in there? Thankfully, GLAAD stepped in and dropped the hammer, prompting Paramount to pull the joke from the trailer and the movie. Score one for progress. Now, if only they had shelved this entire abomination altogether. I have no respect for anyone associated with this film. Period.

3.) Technically, lying is a sin – Okay, Robert Rodriguez is challenging Mark Millar for the title of “lie shaped like a human.” Nevermind that he’s been circling Deadpool like a vulture or that his list of possible next projects grows daily, let’s just focus on how he’s said that Sin City 2 was coming for the last five years.

He SWEARS it’s his next project after the next Spy Kids movie, but if you believe him, I think perpetual football misser Charlie Brown is the only creature more gullible than you are. Do we even need a Sin City 2 now? I mean, the first one was groundbreaking in a lot of ways, but it wouldn’t be anymore. Okay, if they get Jessica Alba back to strippin’, it may be vital. It’s just not going to happen no matter what RR says.

4.) Your new Spidey baddie is…. – Well, technically, we don’t know who he is but we know who he is. What do I mean? Well we know that this is the bad guy:

That’s Rhys Ifans, and apart from having the weirdest spelled name in the world and looking like a a stretched out Ron Stewart, he’s kind of fun. The speculation has gone three major places: (1) The Vulture – He’s lanky, he’s bird-looking, and the Vulture WAS the villain in the last known script that was scuttled for this one. (2) Electro – One of the remaining villains that may look cool on screen, provided they change him out of his green-and-yellow footie pajamas that he wears in the comics. (3) Venom – The least likely choice, but the studio knows that Venom is the most profitable bad guy in terms of merch and popularity.

My guess? Probably the Vulture, but I wouldn’t rule out either Kraven or The Chameleon. Why? Low budget. The film only has an $80 million budget and is shooting 3D. The effects would be less necessary for the villain if you go with someone who doesn’t have massive powers. Personally, I think Venom is out because of that reason alone. Could be the Lizard, but I think he’s out for that same reason. Oh, and incidentally, just make the damn movie already. The only thing I’ve done more than report on rumored casting for this movie is make jokes that only I find funny.

6.) Flash news! – I don’t know why they insist on making a new Flash movie when we already have the amazing 1990s TV series.

I loved that show when I was younger…because I used to like things that were terrible. Now comes word that the script for the new movie version is due by the end of this year and that Bradley Cooper is in the lead to play the fast-runner who runs fast…and that’s about it. Cooper seems like a good fit, even though he also seems like kind of a jerk. I have nothing to go on there, just a gut feeling, but this is a blog so I don’t have to fact check or use real information or anything.

7.) Super lie – I’m not spending much time on this one. Someone supposedly saw Brad Pitt around where Super 8 is shooting, suggesting he may have a secret cameo. It’s filming in a small town. So what is far more likely is that someone who looks something near what Brad Pitt looks like was around town. Incidentally, even looking somewhat like Brad Pitt probably rules, so don’t feel bad guy-who-just-started-a-false-rumor.

8.) Jackasses return in front of Jackass – The return has been…anticipated? 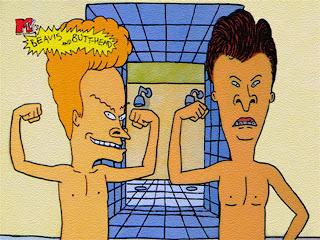 That’s right, the dynamic douche duo is back…sort of. The animated pair will be talking about 3D to kick off the 3D extravaganza that is dudes doing things with poo and harming their genitals! Jackass 3D will feature an animated opening with these knuckleheads, which is great news to a few people who confuse nostalgia for quality.

9.) Danny B to hit up a sequel – Danny Boyle doesn’t like repeating himself…and so repeating himself may be a way to not repeat himself. What do I mean? Well the director hops genres with nearly every film but has never made a sequel. Now comes word that he’s considering returning to the world set up by my favorite true horror movie ever.

Great pic from Slashfilm by the way. We don’t think it will be 28 Months Later , and we don’t know the idea that prompted Danny B to consider actually directing it himself, but let me be the first to say how excited I am. The prospect of a great director returning to do a horror sequel is just drool-inducing. I’m a big fan of this potential load of malarky, considering I can’t actually see him agreeing to do this.

10.) Because this is how all posts should end –

Christopher Lambert may be in Ghost Rider 2 . Also, he may be in your garage right now. I’d check.