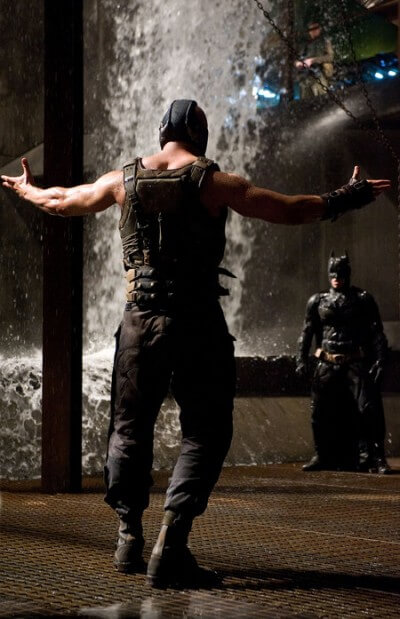 From Christian Bale’s bark to Hans Zimmer’s “gonna getcha” score, if director Christopher Nolan has driven one point home in his Bat-films, it has been this: “Take my films seriously, yo.” From meditations on the fine line between vengeance and justice to the moral ambiguity of using high-end technology “for the greater good,” this Bat-trilogy has cleverly and successfully fused “real world” stuff with “comic book” stuff. Until now.

The Dark Knight Rises (TDKR), the final chapter in Nolan’s Bat-saga, is an ambitious, thrilling catastrophe that collapses in on itself like the death of a gorgeous celestial star. It is at once a celebration of everything this cinematic genre has to offer (modern morality plays, archetypal character work, decadent technological showcase) and everything it often fails at (believability, nuance, a plot that makes any kind of actual sense).

TDKR is a nearly three-hour long ink-blot Rorschach test, the reaction to which reveals more about the viewer than the movie. Immediately after viewing, more than 40 questions popped up like unwanted moles in need of a good whacking; these range from issues of plot convenience to thematic inconsistencies. But we’ll get to all that in a few Bat-minutes—and yes, above all else, “Bat-” remains the prefix that keeps on giving.

For all its dilly-dallying, the plot is you-gotta-be-kidding-me simple. Eight years after the events of the last film, Batman (Bale) remains in exile in order to preserve the memory of deceased D.A. Harvey Dent (Aaron Eckhart). By making Dent look like a hero and not a half-faced horror show, Commissioner Gordon (Gary Oldman) helped leverage public opinion to pass “The Harvey Dent Act,” which allowed the streets of Gotham to be cleaned up. How? That’s just question one.

Bane (Tom Hardy), a muscle-bound nutso in a designer surgical mask, shows up determined to destroy the whole city with a bomb. Although his plan is seriously that simple, it somehow also involves Selina Kyle (Anne Hathaway) stealing Bruce Wayne’s fingerprints and selling stock holdings among other distracting gibberish. While Bruce uses futuristic knee-brace technology to once more suit up, Alfred (Michael Caine) throws an unmotivated tantrum and leaves, Lucius Fox (Morgan Freeman) somehow goes from genius to overseer of a bankrupt once-multi-billion dollar enterprise and Miranda Tate (Marion Cotillard) and John Blake (Joseph Gordon Levitt) do a bunch of stuff that would be considered spoilers so we can’t talk about them much.

If it seems like this all goes together about as well as Hellen Keller’s jigsaw puzzle, you aren’t wrong. Characters pop from one place to another without explanation, act in direct opposition to how they’ve behaved in two previous movies or disappear entirely. Like Batman. That’s right: Batman vanishes for almost an hour while characters like Matthew Modine’s nameless cop get screen time. It’s not simply a case of Nolan trying to do too much, but doing too much too poorly.

That isn’t to say TDKR isn’t kinda good. It is. Despite itself. Wally Pfister’s cinematography is just out-of-this-world, the chaos means that even at nearly 3 hours it’s never boring and the goodwill generated by the first two films flow freely into this one, even without a performance anywhere near as ballsy as Heath Ledger’s. It’s just that by trying to shoehorn in broad comic book brush strokes, like the destruction of an entire city with a bomb Wayne Enterprises created, the “reality” Nolan wants evaporates into hammy nonsense.

Sure, the Joker was extreme, but sociopaths do exist; fuzzy-vest-wearing terrorists who have a Darth Vader voicebox and bully a whole city into collectively fighting itself after a menacing speech at a football game, not so much. And the ending, have mercy, the ending… Savages didn’t even get to hold on to the “worst conclusion of the year” award for a full two weeks, as Nolan packs in a deux ex machina finale that still doesn’t fix anything and plays like bad fan fiction, down to relentless relationship obsessing.

But let’s take a step back here and place this in context of the broader trilogy. Undoubtedly one of the best pop-culture cinema sequences of all time, it hit its high point in its second act (The Dark Knight), which is nothing to be ashamed of. That said, watching all three films in a row reveals the first half of Batman Begins to be perhaps the best told on-screen superhero origin story and solidifies that first installment as the only Bat-flick ever to focus exclusively on our hero and not the villain-of-the-week. The Dark Knight may be a better movie, but Batman Begins is a better Bat-movie.

The problem is, by the time TDKR hits, every character except for the bad-ass Gordon betrays who they were established to be. Lucius goes from genius to dolt, Alfred goes from loyal-until-death to “peace out, homey” and, most damningly, Bruce goes from a man who declared war on crime to honor his murdered parents to a man who refuses to fight crime to honor his murdered girlfriend. And that’s the real bummer about TDKR: it’s not that it fails in just a “how did so-and-so get there” or “why did so-and-so do that” fashion, but that it lets down the very character arc it tried to build up.

TDKR is not a bad movie, nor is it great. And yet it will be called both by those who either expected too much from it or subconsciously vowed to love it no matter what. The reality is it’s just a pretty good end to an otherwise legendary series. Now we must once more fear the Batman…reboot.