Home » Film » Deadpool Me Twice, Shame on Me? 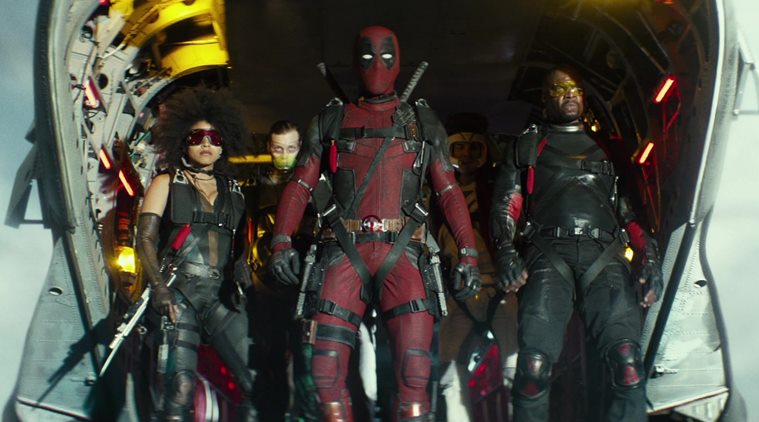 Deadpool is that one friend or family member you have who was born with a busted “off” switch. To make things easier, and definitely not because of two other very obvious reasons, let’s call that friend “Ryan.” Ryan is either a hoot to hang with or desperately in need of some “shut-up juice,” depending on your mood and worldview. Like cookies to a fuzzy blue monster living in the obesity era, Deadpool—and the actor who plays him—is a “sometimes” food.

Before the legitimately gorgeous, Bond-riffing opening credits, Deadpool 2 tips its hand by engaging in the laziest, most misogynistic comic book trope of all time. I won’t spoil it here, but it is worth noting that Deadpool’s rampant fourth-wall breaking self-parody is wholly silent on just how uninspired and shitty this tired means of “motivating a male hero” is. Maybe that’s because Ryan Reynolds not only plays the titular character but also cowrote the film, which had to have taken him at least an hour given the intricacies of the one sentence plot: Deadpool must protect a young mutant, Russell (Julian Dennison), from a time-traveling soldier, Cable (Josh Brolin), who aims to kill the boy before he becomes a supervillain.

The beats that work in Deadpool 2 work insanely well. The introduction and first outing of X-Force, the team Deadpool assembles to help him stop Cable, is a truly spectacular bit of comedy uniquely enriched by modern advertising. One member of that team, Domino (Zazie Beetz), is an inspired and much-welcomed addition, and a surprise villain is also used pitch perfectly. All that combines with choice moments of Deadpool’s diarrhetic patter to make for an entertaining-enough experience for audience members with a sufficient Ryan threshold.

What doesn’t work in Deadpool 2 are mostly the fundamental flaws hard-wired to the character and the near-sighted decision to not replace TJ Miller with a talking CGI port-a-potty. Most grating are the redundant jokes. Riffing on how Reynolds regrets his appearances in the first solo Wolverine movie and Green Lantern were funny-adjacent in the first film, but here they feel like your friend Ryan yelling “Dilly Dilly!” at a bar. There is a point at which you’re no longer making a self-aware reference, you’re just actively working through something while other people watch.

The biggest takeaway is that doggedly faithful adaptations of niche characters can and will always find their people, I guess. To get appropriately meta, I honestly don’t know the point in writing a Deadpool 2 review. There’s not much significant dialogue that can be generated, and the audience reactions are fairly predetermined by your Ryan affection/tolerance.