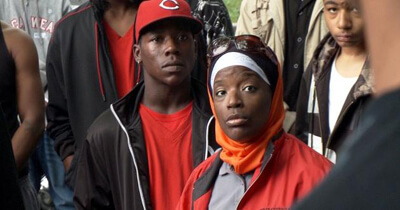 We’re no Windy City, but Omaha has endured the cold gusts of murder enough to feel sick, enough for The Interrupters to resonate and resonate hard. Director Steve James, whose Hoop Dreams still ranks among the most poignant of recorded nonfiction, has again found a way to seamlessly weave narrative and message, to simultaneously break hearts and raise spirits. Working with best-selling author Alex Kotlowitz, James has crafted riveting material that is somehow every bit as entertaining as it is important … especially now, especially for us. Omaha: Pay attention.

The Interrupters spends a year in Chicago. It’s not just any year; it’s the year after the videotaped murder by bludgeoning of a teenager, Derrion Albert, made the “city of broad shoulders” slump in shame and hopelessness. The film follows CeaseFire, an organization determined to combat urban violence by treating it as a disease. Essentially, “violence interrupters” are deployed to the most “infected” areas, where their job is to come between violent thought and action.

These aren’t do-gooders speaking out of turn. These are hard-core, rap-sheet-sporting former criminals who speak to potential murderers and felons without condescension or judgment. James focuses on three activists in particular: Cobe, a former gangbanger turned “nerdy” soccer dad; Eddie, a convicted murderer who now teaches children with art therapy; and Ameena, a one-time high-ranking mafia drug-runner. Their work is pure penance, and the transcendent aspect of the film is watching their redemption unfold as they prevent the creation of newer, younger versions of their former selves.

Although effective, CeaseFire often takes criticism from police and other organizations because the nature of their methods requires blind eyes be turned to ongoing crimes. This decision is not undertaken lightly but is deliberate and necessary: they must be trusted by their targets. The workers are not concerned with punishment; they are laser-focused on interrupting the one case of immediate violence in front of them. They don’t have to stop all the murders, just that particular one.

These are capital-letter Heroes getting lower-case coverage, and their methods must be considered anywhere the epidemic of violence hits full-blown outbreak. But don’t think James spends the documentary’s running time preaching. Far from it. He simply lets the unscripted life-and-death situations unfold. From brothers living in one house but running with rival gangs, to a particularly hardened man determined to strike back at a snitch, each scenario comes with thick tension and the highest stakes. Sorry, TNT; The Interrupters knows drama.

In what has been a particularly exceptional year for documentaries, The Interrupters sits at the head of the class. This is, in part, because if you squint your eyes a bit, the blur of South Side Chi-town can look a bit like troubled pockets of our own city. Here’s hoping this film finds its way in front of those capable of instigating the change we need here. There’s little question Omaha’s ongoing dialogue about violence could use a particular “interruption.”