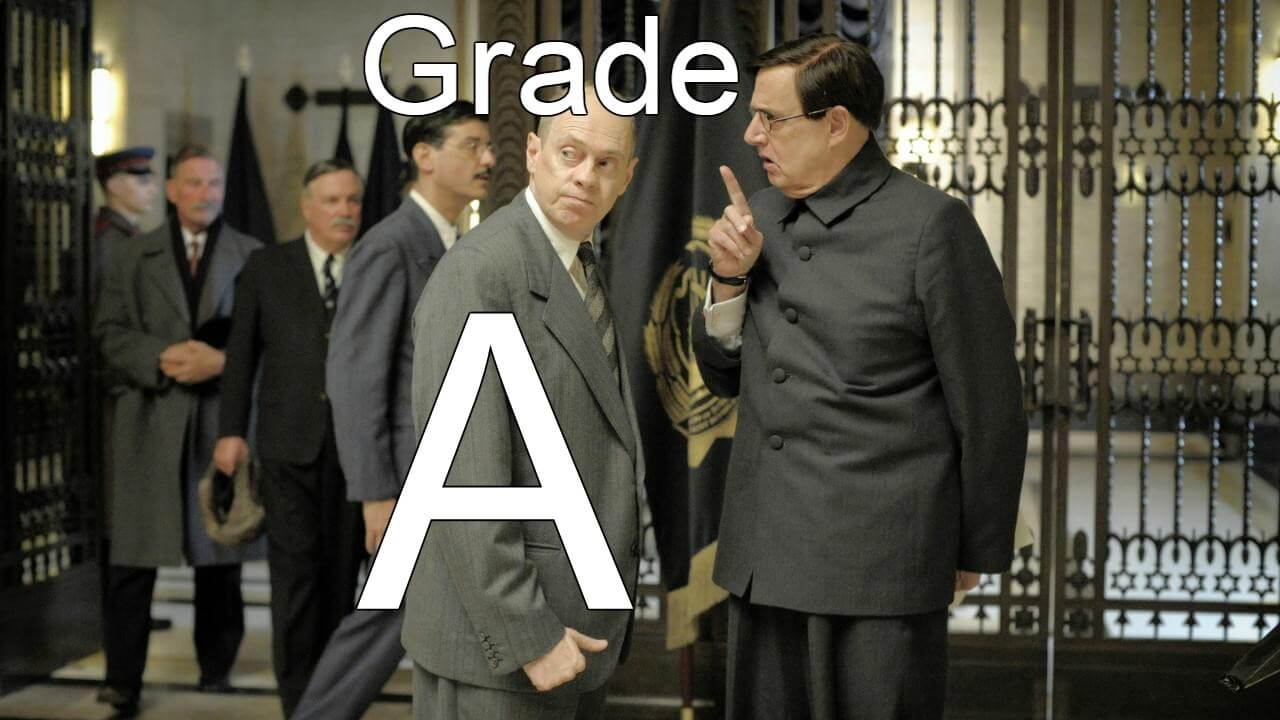 Ensnared in a real-life, ersatz satire of politics since November 8, 2016, America is hemorrhaging too much liberty and moral authority to find the Trump administration anything approaching “funny.” So it’s not just that writer/director Armando Iannucci’s The Death of Stalin provides a much-needed safe space within which to point and laugh as feckless government officials violently bumble. It’s that the film brutally exposes and ridicules the vile nature of small, stupid men obsessed with looking big. It is a blistering, brilliant two-hour excoriation of a Trumpian way of thinking and behaving that makes up for its lack of optimism with quality moments of nekkid would-be emperors constantly soiling themselves.

When Josef Stalin (Adrian McLoughlin) croaks in gloriously undignified fashion, it sets off a panicked scramble to fill the void left by his murderous mustache. Georgy Malenkov (Jeffrey Tambor) is the immediate successor, but his is a timid, limp, wet-palmed grasp of power. Lavrenti Beria (Simon Russell Beale) and Nikita Khruschev are the real threats, each manically eyeing the other, issuing mandates and covert commands that kill thousands of innocent Russians.

Beria and Khruschev are shrewd schemers beset on all sides by incompetence and treachery. Fellow councilmember Vyacheslav Molotov (Michael Palin) appropriately has enough Os in his last name to spell “booob.” Stalin’s son, Vasily (Rupert Friend), makes Eric and Donnie Trump Jr seem like regal Mensa members. Beloved war hero Field Marshal Zhukov (Jason Isaacs) is as highly competent as he is willing to stage a murderous coup without so much as a good night’s sleep. The whole gang plots and postures, culminating in what is inarguably one of the more horrifically graphic and violent deaths ever shown in a screwball comedy.

The genius of The Death of Stalin lies squarely in its savagery. Laughter can be a potent sympathizer, turning predators to teddy bears, but the film perpetually humiliates wanna-be dictators without ever excusing or humanizing them. Wisely, Iannucci never dials down the grotesque, nor does he make light of the atrocities that are perpetrated. It may feel wrong to chuckle during scenes replete with firing squads and the callous dispatching of alleged dissidents; however, the target of ridicule never moves from the fascists’ backs. You’re relentlessly laughing at men who would have killed you dead for doing so.

Most importantly, you’re laughing a lot. The Death of Stalin may not feature a single “you have to see the scene where…” moment, which feels odd. That’s only because most mainstream comedies typically feature only a couple big-laugh, gonzo tentpole sequences that are strung loosely together by a few sparse chuckles. Iannucci’s humor is meticulously doled out, a few chortles per minute, and unlike Soviet breadline distribution, the portions are ample. From its gleeful mockery of toxic men in power to the exceptional pace of its yuks, The Death of Stalin is that rare comedy that may well be on the “best of” shortlist by year’s end.